Every year, young players strive to take their game to the next level to fulfill their promise. Some live up to expectations, others fail. For 2017, these are five Uruguayan players who could take that next step and deliver on their promise.

Voted as best foreign player in the past year’s Brasileirao, Giorgian De Arrascaeta (22) has been one of the outstanding players in South America for the last 12 months. The Defensor Sporting youth graduate played his first season for Cruzeiro as a starter and did not disappoint.

In fact, there is a case to be made that the Uruguayan playmaker was Cruzeiro’s best player throughout the year. De Arrascaeta is yet to have the same impact for Uruguay. Another season like his previous one, however, and Uruguay manager, Oscar Tabárez, will surely be tempted to use the youngster more frequently.

“Who?” would probably be your reply if I mentioned the name Lucas Torreira six months ago. Nonetheless, after an impressive first-half to his Serie A debut season with Sampdoria scouts across Europe have taken notice. The 20-year-old midfielder has proven himself to be a very versatile player.

Operating as a No6, Torreira contributes in both breaking down attacks as well as setting them up. If the man born in Fray Bentos can keep up his development, 2017 could present him with the opportunity of a Uruguay call-up. Torreira has all the qualities to be the natural successor of Uruguay’s aging Arévalo Rios. 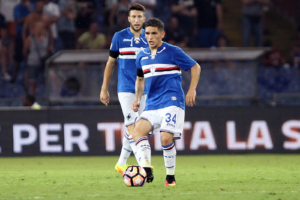 One of the big promises of Uruguay’s upcoming generation has to be Nicolás De La Cruz. Liverpool Montevideo’s No10 possesses an abundance of pace complemented by wonderful dribbling ability. It’s these traits that make the 19-year-old impossible to track at times.

The youngster’s potential has also been acknowledged by the Uruguay setup as he’s represented La Celeste in the U17, U18 as well as the U20 category. De la Cruz will be traveling to Ecuador for the latter, come January, to compete in the South American Youth Championships. A good performance in this tournament would be a perfect start to what could be De La Cruz’ breakout year.

VIDEO: Here is a goal that he scored a few weeks back vs. Uruguayan giants Nacional. Pace, skill and composure. (via @martindacruz_). pic.twitter.com/GG5nVQW80Q

The second Defensor Sporting youth product to make this list is 23-year-old Diego Laxalt. It’s been four years already since Laxalt was bought by Italian giants Inter Milan. After three loan spells, I Nerazzurri sold the wide player to Genoa. A decision Inter may live to regret, because Laxalt has been one of Genoa’s key players in the 2016/2017 Serie A campaign so far.

The midfielder’s performances have even attracted interest from Chelsea manager Antonio Conte, who is believed to be an admirer of the Uruguayan. With his current form and confidence levels, 2017 has all the ingredients to be Laxalt’s breakthrough year in Europe.

After scoring 51 goals in 105 matches for River Plate Montevideo, Michael Santos (23) earned a move to Spanish side Málaga in the summer of 2016. The start to his career in Europe has been a bit of a slow ride, though, with just 396 minutes across all competitions.

With four goals in his very limited playing time, the two-time Uruguay international has, however, shown his undeniable predator instincts. When the winter break is over, Santos should be ready to challenge for a starting spot after six months of adaption in Spain. Given half a chance, Santos’ goal scoring abilities could really make a difference to Málaga’s La Liga campaign.