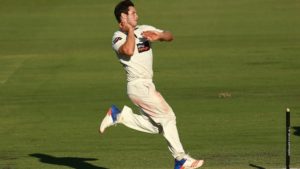 All-rounder Hilton Cartwright 24, will make his debut for Australia in the third Test against Pakistan on Tuesday, left arm spinner Steve O’Keefe is also included in the team. This was reveal to journalists by captain Steve Smith on the eve of the Test.

Left arm spinner Steve O’Keefe is also included in the team, this was reveal to reporters by captain Steve Smith on the eve of the Test. Cartwright, a batting all-rounder who can also bowl medium pace replaces Nic Maddinson in the squad after the left handed batsman scored a mere 27 runs in four innings.

O’Keefe 32, is the only other change from the team that won the three match series with a game to spare at the Melbourne Cricket Ground last week. He was selected ahead of fellow left arm spinner Ashton Agar who had also been recalled to the squad as a second spinning option behind off spinner Nathan Lyon for the Test at the Sydney Cricket Ground (SCG) which has produced slow turning pitches.

O’Keefe has played three Test matches including the Sydney Test against the West Indies last year, but was injured when Australia visited Sri Lanka later in the year.