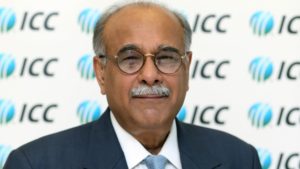 The Pakistan Çricket Board (PBC) has invited the West Indies to play two Twenty20 internationals in Pakistan, this was comfirmed by the executive committee of the Pakistan Cricket Board (PCB) Najam Sethi at a press conference over the weekend.

Sethi told journalists the invitation a  response to the West Indies Cricket Board (WIBC) requesting Pakistan to play two Twenty20 Internationals in Florida next March.

The West Indies will play three One Day InternationaIs against England in Antigua and Barbados from February 25 to March 9, according to Sethi, the WIBC had requested the two matches be played at the end of series.

“We give a proposal to the WICB that after the series against England which will end on March 9, they can come to Pakistan between March 11 and 15”, Sethi told reporters.

He stated once the WICB agrees to the tour, the PCB would sanction the matches in Flordia at the end of March. No major Test playing country has toured Pakistan since milliants attacked a bus in Lahore carrying the Sri Lanka team injuring six cricketers and killing six policemen.

Sethi said while he understood there would be reservations by the WICB, he assured that the volatile security situation in Pakistan had improved.

“We told them (WICB) that the security situation in the country had improved and the  Pakistan Super League (PSL) will also be played in Lahore, in this scenario, there is no reason to refuse a tour to Pakistan”, he explained.

” If the PSL final is held in Lahore, followed by the world T20 champions visit to play a T20 series in Lahore then this development will open the door of international cricket in Pakistan “, Sethi said.

CricketSoccer Desk - June 20, 2021
0
At Rome, Italy maintained their unbeaten run whereas in Baku Switzerland kept the hope alive for the progress to the next round. Wales breathe a sigh of relief despite the defeat at Rome because of the goal difference as they finished second in Group A.