Sixteen years have passed in the twinkle of an eye. To be specific, it was in November 10, 2000 when Bangladesh achieved the coveted Test status and started their journey by playing against their neighbours India. Since then, India have paid a visit to Bangladesh several times, but the big brothers never invited the Tigers for a Test series till now.

Anyhow, finally, the waiting is coming to an end. India will host Bangladesh for a one-off Test on February 9, 2017. Without a doubt, it would be one of the most memorable moments for the fans from both countries and the Bangladeshi fans are eagerly waiting for the action to move on as soon as possible.

India have played eight Test matches against Bangladesh and their performance had been dominating. Even though, the majority of the contests were heavily one sided, but they were not without some memorable moments for Bangladesh.

India, led by Sourav Ganguly, visited Bangladesh for the inaugural Test match. Batting first, the Bangladeshi batsmen were in a run-making mood. Habibul Bashar set the tone with a strokeful half-century and then it was time for the veteran Aminul Islam to showcase his skill on the big stage. He dominated the Indian bowling, especially the spinners with authority and registered his name in the history books by notching up a hundred in his first ever Test and joined the likes of Charles Bannerman and Dave Houghton as the only batsmen to score a century in their nation’s first Test. 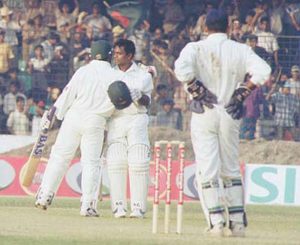 Bangladesh’s total of 400 was the second highest’s first innings total by a Test nation on debut- only Zimbabwe’s 456 against India in 1992. Bangladesh batted cautiously, scoring at only 2.60 runs per over, but kept the Indians in the field for long enough to tire, as the bowlers delivered a mammoth 153 overs.

But Bangladesh’s brilliant performance was overshadowed by a dismal display in the second innings as they were skittled out for just 91 and Aminul Islam’s historic hundred went in vain.

India visited Bangladesh in 2004. They mauled the host in the first Test at Dhaka and their performance was dominating the second as well. But the second Test became a matter spectacle due to one man’s scintillating batting display and he was none other than Mohammad Ashraful.

Bangladesh were 54 for 3 in reply to India’s first innings total of 540. Ashraful decided to use his bat like a sword and took the attack to the opposition by unleashing one of the most ruthless assaults ever seen in the Chittagong cricket stadium. Irfan Pathan, Zaheer Khan, Anil Kumble and Harbhajan Singh were punished with a rare disdain. Ash remained not out on 158 and he hit 24 boundaries and three sixes.

But his efforts were wasted as the hosts digested a heavy defeat in the end.

The Asahraful assault at Dhaka

In the second Test at Dhaka, Bangladesh were following on and at 10 for 3, another shambolic display was on the cards. But Ashraful yet again gave the frustrated crowd, some entertainment. He was avoiding a pair and the first ball he faced from RP Singh was whacked to square leg with power, the second one was defended while the fourth one was punished for four. For a brief period, the memories of Chittagong-assault in 2004 were unleashed at Dhaka, but as usual the murderous knock of 67 off 41 balls with 12 fours and two sixes didn’t prove a point.

India’s next visit in 2010 didn’t start in a friendly manner. Virender Sehwag tagged the Tigers as ‘ordinary’ which triggered huge criticisms and it also ignited Bangladesh to a great extent. Shakib Al Hasan and Shahadat Hossain bowled brilliantly to test the might of Indian batting line-up as the visitors were bundled out for 243 in the first innings. Shakib and Shahadat bagged five wickets each, but despite a fighting effort in the first, the hosts failed terribly in the second and suffered another defeat.

India took a mammoth lead in the first innings in reply to Bangladesh’s paltry first innings total. The Tigers needed a gallant reply in the second to test the visitors and Tamim Iqbal set the tone by unleashing an assault on the Indian bowlers. There were the slog-sweeps, dam-care hits over mid on and powerful cuts as Zaheer Khan and Harbhajan Singh felt the heat of the mighty Khan, who plundered 151 with 18 fours and three sixes in a breezy fashion. Bangladesh were 290 for 3, but Zaheer Khan triggered a collapse as the host lost last seven wickets for just 22 runs.

When Virat Kohli entered into the scene, India were in a commendable position and expected their star batsman to notch up another big ton and bat Bangladesh out of the game. Jubair Hossain, a legspinner came into bowl against Kohli and we all well aware how good the Indian batsmen are against the leggies.

It was the last ball of over number 74 which Jubair pitched in and around off stump and turned in from off to middle and leg after pitching and flummoxed Kohli to disturb his timber. The big gun was dismissed for just 14 as Fatullah exploded in joy.

The only Test in 2015 was washed off by rain, but the dismissal of Jubair is still fresh in the minds of Bangladesh cricket fans.