Centuries from Virat Kohli and Murali Vijay helped India finish day 1 of the only Test against Bangladesh at Hyderabad on a high. India at stumps are 356 for 3 with Kohli batting on an unbeaten 111. The Bangladesh bowlers had a testing time on the field throughout the day.

Cricketsoccer brings to you the talking points from the first day’s play:

Pujara and Vijay give India a good start

After losing KL Rahul early in the piece, Cheteshwar Pujara and Muratli Vijay added 178 runs for the second wicket thereby preparing a perfect platform for the Indian middle order to cash in. Pujara in the process completed his 11th Test fifty scoring 83 of 177 balls.

Vijay and Pujara engage on a bad mixup 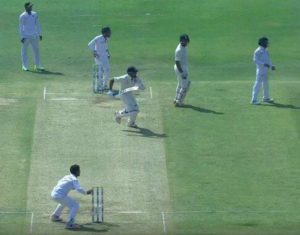 Just when their partnership was starting to take shape, Pujara and Vijay was involved in a run out chance after Vijay played the ball to the leg side and both were ball watching. Kamrul Islam was quick enough to get the ball and threw it at the bowler’s end, but  Vijay was saved after Mehedi Hasan, the bowler failed to gather the ball cleanly. This was the best chance for Bangladesh to jolt the Indian batting line up.

Virat Kohli kept his good run with the bat going as he brought up his 17th Test ton. His unbeaten on 111 and has played some sublime shot in his innings. With Rahane at the other end he has already added 122 runs for the fourth wicket.

Skipper Mushfiqur Rahim came under criticism of the commentators when he went for a review against Virat Kohli. Kohli had defended the ball right from the middle of the bat while Rahim thought that the ball had hit Kohli’s pad. Also, none of the fielders around Kohli denied Mushfiqur from going upstairs. Also the bowler Taijul Islam said nothing to Rahim which was surprising to see as he was the bowler and had the best view. Somewhere in between Rahim’s inexperience as a skipper came into the fore.

Bangladesh bowling was not up to the mark

Even though Taskin Ahmed and Kamrul Islam Rabbi bowled well with the new ball, but as the ball got older and the track lost its life, the bowling unit of the visitors struggled big time. Their line was decent, but they erred in length. One cannot put the Indian batting line up under pressure by bowling too short.

Skipper Mushfiqur Rahim missed a trick as he under used his most experienced bowler Shakib Al Hasan on Day 1. Shakib bowled only 13 overs in which he gave away on 45 runs. The reason for him being under used is hard to understand as he is their premier bowler and someone who can extract the most out of the conditions. How will Rahim make use of Shakib on Day 2 will be interesting to see.