Back in the day in 2010, Luis Suárez was still pretty unknown to the wider audience. The striker was breaking all sorts of records in Holland for Ajax, but really made a name for himself when he was one of Uruguay’s key players in a glorious World Cup run that ended in the semi-finals.

However, just like he has done on many occasions throughout his career, Suárez managed to turn himself into a villain. With seconds remaining in Uruguay’s quarter-final vs. Ghana, Suárez handled what could have been a last-minute winner for Ghana from the line. Suárez was sent off, but Ghana missed the penalty given to them, allowing Uruguay to win the game on penalties and advance to the last four.

Suárez went on to say “The ‘Hand of God’ now belongs to me”, causing even more hatred towards him from almost every football fan. In contrast, the public perception of Suárez’ actions in Uruguay was the complete opposite. He was the national hero.

On every ground other than Anfield, Luis Suárez was on the receiving end of extreme amounts of hostility while playing in England. It was a result of some controversial cases where the Uruguayan was involved in.

Normally, Suárez would ignore the crowd and just play his game, but there was one occasion where the forward couldn’t stand it anymore. In the midst of court cases about allegations of Suárez racially abusing former Manchester United defender Patrice Evra, the Suárez had a hard time away at Craven Cottage, Fulham. 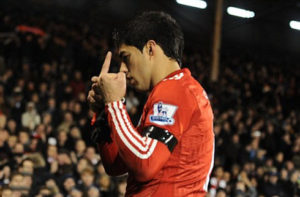 The fans, Suárez later admitted, were constantly calling him “that word”. When the game was over and the players left the pitch, Suárez showed his middle finger to the Fulham supporters. The FA subsequently handed him a two-game ban.

There is one particular flaw Luis Suárez will always be remembered for; his biting. It’s something that most people find strange and inhuman. And above all that, he didn’t do it just once, not twice but three times!

Suárez was given lengthy bans for all three incidents, with his latest – on Italy international Giorgio Chiellini at the World Cup of 2014 – being the most severe of all. A ban for four months of all footballing activity was the jury’s verdict.

It is the longest ban ever to be handed to a footballer for events that took place on the pitch. In the aftermath even the victim Giorgio Chiellini came out to say the ban was a bit harsh.

Ahead of the always eagerly anticipated Merseyside Derby back in 2012, Everton manager David Moyes added some fuel to the fire by claiming that “divers” such as Liverpool striker Luis Suárez were turning away supporters from English football.

Suárez, never shy to add some fuel to the fire as well, clearly overheard the comments of the Scottish manager and responded in brilliant fashion by diving in front of Moyes after he had just scored for Liverpool against Everton.

Luis Suárez style of play is always just within the boundaries, it’s what makes him the fantastic player that he is. There have been occasions, though, where Suárez overstepped those boundaries and got himself in trouble.

The Premier League meeting between Liverpool and Tottenham Hotspur in February of 2012 was one such example. The flipside of genius, mad, was what Tottenham player Scott Parker had to deal with as he received a kick to the stomach by Suárez for no apparent reason.

Mbappe has to lead the attack because he’s No.1. Messi was...

CricketSoccer Desk - September 28, 2021
0
Paris Saint-Germain have to use Lionel Messi to provide Kylian Mbappe with chances, and not the other way around, at least according to Nicolas Anelka.