Bangladesh played a Test match on Indian soil for the first time in their history of Test cricket. Critics and fans expected a fitting reply from the Tigers in familiar conditions, but in the end, it turned out to be an easy win for the home team. Whether the Bangladeshi cricket fans and critics should be satisfied with the performance of the Tigers or not remains a moot question…..

The tea break was postponed. India were one wicket away from yet another series win under the captaincy of Virat Kohli. Ravichandran Ashwin dished out a slider which beat Bangladesh’s last man Taskin Ahmed. India appealed for a leg before wicket. But umpire Marias Erasmus went across to his partner Joel Wilson to consult and decided to check for a bat-pad catch with the help of the third umpire. The replay showed, there was no contact between bat and pad and the case of a bat-pad catch was overruled.

Virat Kohli decided to review again for an lbw and confirmed the end of Bangladesh’s innings before tea. On a very good batting track, the visitors ended up the ghost without putting up any brief resistance and lost the Test by 208 runs.

On the final day of the only Test between India and Bangladesh at Hyderabad, the visitors were needed to exhibit resolve on a very good batting track and fight hard to save the Test match. Mushfiqur Rahim and Mahmudullah Riyad’s 56-run partnership was an inspiring one, but as soon as Mushfiq’s rush of blood ended his stay at the crease, Bangladesh lost their way in no time and digested a heavy defeat.

The popular print and electronic media and celebrities of social media in Bangladesh are trying to highlight the performance of the Tigers as a satisfactory one. As because, in both innings, Bangladesh have played more than 100 overs and they were able to take the game to the fifth day where teams like South Africa, New Zealand and England failed.  Whereas, the tracks on which South Africa, England and New Zealand were tougher than Hyderabad.

Moreover, there was an epic hundred from Mushfiqur Rahim and a stubborn resistance from the 19-year old sensation Mehedi Hasan Miraz, which triggered a wave of satisfaction among the Bangladesh cricket pundits and fans.

But in my opinion, Bangladesh’s performance lacked intent and professionalism.

Failure of the Bangladeshi top order batsmen on a flat track

The conditions at Hyderabad were similar to Mirpur and Dhaka and a lot friendlier than New Zealand. It was a flat deck and till the final day, it remained absolutely perfect for batting. The Hyderabad track neither offered movement and bounce for the pace bowlers nor turn for the spinners. All Bangladesh needed to do was exhibit patience and occupy the crease as much as possible, rather than relying on playing more strokes and fetch runs via striking boundaries.

In Test cricket, boundary-based batting and over-adventurous strokes have little value. It’s a pity, even after playing Test cricket for 17 years, Bangladesh still have not realized this.

In reply to India’s mammoth first innings total, the top order of the visitors was needed to give Bangladesh a steady start. Sadly, the top order of Bangladesh succumbed on a flat deck and put enough pressure on the middle and lower order. Yes, there was some hostile spell of pace bowling from the likes of Umesh Yadav and Ishant Sharma, but surprisingly, Soumya Sarkar, Mominul Haque and Mahmudullah Riyad lacked the technique to survive the guile of Umesh and Co. 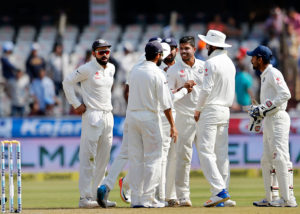 Umesh was able to reverse the ball at pace and if you are a top order batsman, you should have the ability to counter those. The Bangladeshi batsmen lacked a sound technique while playing against the reverse swing. Bangladesh did experience playing against some top quality reverse swing bowling against England at home, but sadly, they didn’t work on their shortcomings.

Moreover, the tendency to throw away wickets after getting well set still remains a thorn in the throat for Bangladesh and, it seems, the Tigers are unable to bury the ghost despite suffering so much for executing suicidal strokes during the crucial stage of a match. Again; sloppy fielding, funny reviews and lack of discipline in bowling undid the visitors.

Bangladesh failed to keep their energy on the field as the day progressed. The way Taskin Ahmed and Kamrul Islam were bowling in the first session of the first day, it ebbed away in the second and remained the same throughout the Test. Meanwhile, after the first session of play on day 1, the fielders were seen to struggle while running after the ball and lacked the energy which is required for a five-day match.  From a fitness point of view, Bangladesh had not been up to the mark.

To survive the strains of a five-day match, maintaining the fitness is very important. The athleticism and agility of Virat’s men give you an indication about the importance of fitness in Test cricket. If you get tired early, it becomes tough to maintain the same level of concentration and urge to perform in a Test match.

Should Bangladesh be satisfied with the performance at Hyderabad?

If I consider Bangladesh’s improvement in the last two years, I don’t think one should not relish such smaller achievements and bask in a false glory. In the name of so-called patriotism, trying to highlight the ‘positives’ is nothing but an attempt to hide the problems which are bigger and requires rectification.

Bangladesh should not be satisfied only by playing hundred overs in both innings and surviving five days at Hyderabad, but they need to sit down and ponder about how to win Test matches and avoid defeats.

‘We play few Test matches’ is not a valid statement anymore after playing 17 years of Test cricket. Bangladesh need to ask themselves how much emphasis they gave on playing five-day matches, how much they tried to utilize the opportunities they got and how much effort they put in to improve in Test matches over the years.

What’s next for Bangladesh?

No patience, no fighting spirit. Bangladesh looked pale at Indore