He was with the Australian team, which won the test series in India 13 years back. Former Aussie speedstar Michael Kasprowicz is on a tour to India again, but not as a player, but as an official, being one of the board members of Cricket Australia. In Pune, where Australia stunned Virat Kohli’s men to win the first test match within two and half days, CricketSoccer catches up with Kasprowicz for an exclusive interview. The former pacer, with 38 test matches under his belt, states that India has to suffer if they they take Australia for granted.

Here are the excerpts:

CricketSoccer: Destroying Indian batting line up in both the innings in a Test match, that too in their own backyard, Australian left arm spinner Steve O’Keefe has become a surprise package to all.

Michael Kasprowicz: I am not surprised at all. See, we set our goals, six months back. We lost all the three test matches in Sri Lanka last year and that was a moment of reckoning for us. We knew if we have to do well in India, we have to overcome our weakness of spin bowling. We had a meeting where we shortlisted 13 spinners who had done well in Australian domestic cricket to form a pool of spinners. Then we had quite a few programs for them, engaged S. Sriram as the spin bowling consultant. We take the help of the likes of Muttiah Muralitharan, Rangana Herath and Monty Panesar, to prepare the spinners for the tour to India. We had a good training session at Dubai, where the cricketers got the feeling of playing in Indian condition. O’Keefe and Lyon were benefited a lot from this program. One thing I must mention, Australian spin attack can be very fatal this time.

CS: But are you surprised to see Indian batting struggling against spin? 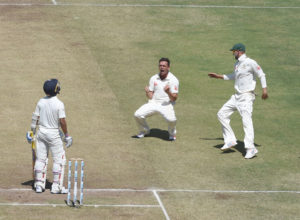 MK: Yeahh… a bit. I suddenly realized that this Indian batting line up is not so solid against spin as it used to be 7-8 years back. I still remember Sachin Tendulkar or VVS Laxman’s incredible innings against the likes of Shane Warne. They really dominate spinners, whether in their home soil or abroad. But this time, the Indian batting looks shaky against spin. They don’t know whether to play front foot or back foot. They don’t play sweep shots. I think it is lack of application that hampers India in the first test match.

CS: Could complacency be a reason for India’s disaster?

MK: I don’t think so. Look, you cannot wipe out India after just one big loss. They played good cricket in last two years and all of a sudden they have struggled in this one. But it happens in cricket. I don’t think it’s complacency on their part. Rather, I will call it lack of awareness. I don’t think they were ready to face such a class Australian spin bowling attack. They must have a better preparation for us. This Aussie team is difficult to beat.

CS: In the First innings of India, Mitchell Starc caused a lot of problems to the batsmen, that too on a turning track. How will you explain his performance? 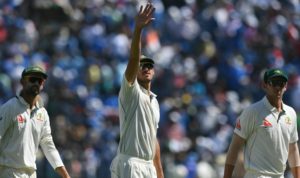 MK: Ohh… Mitch is brilliant. He is one guy from Australian team who have the skill to reverse the ball. In the subcontinent, you have had to master the art of reverse swing. Mitch will be a threat to Indian batsmen throughout the series. One thing I would like to add, even in the subcontinent, in India and Bangladesh, a group of very talented pacers has come up. Mohammed Shami, Umesh Yadav and Mustafizur Rahman are doing pretty well.

CS: You played against Sachin. And now you are watching Virat Kohli playing. How will you rate Virat?

MK: Look, I still can’t forget the Sachin masterclass in Sharjah in 1998. He single-handedly outplayed us. He was a genius. No doubt Kohli is a genius also. But he has to go a long way. He has to score runs in all conditions like Sachin did.