November 10, 2000, will remain as one of the most significant days in the history of  Bangladesh. For the 29-year old nation, back then, achieving the coveted Test status was something special. But in the early years, Bangladesh found it tough to cope with the most difficult format of the game. Shoddy performances in a consistent manner led to the outburst of critics who ended up saying, the ICC’s decision was hasty regarding Bangladesh’s Test status.

After ten months of tough period in Test cricket, the young Test nation travelled to Sri Lanka to play a Test match for the first time against the Islanders. It was the second edition of the Asian Test Championship and it paved the way for the Tigers to learn and improve by playing against the Big Boys of world cricket.

Bangladesh learned through the hard ways.

On September 10, 2001, Bangladesh played their first ever Test on Sri Lankan soil and it was a disastrous couple of days for the visitors. Since then, playing against Sri Lanka in Test cricket in Sri Lanka always remained a strenuous journey for the Tigers and they are yet to win a Test on Lankan soil. Apart from that eventful Test at Galle in 2013, Bangladesh’s performance in Sri Lanka had been shoddy.

But still, there had been some inspiring performances by the Bangladeshis on Lankan soil in five-day matches which gave hope for a better future.

Bangladesh set foot on Sri Lankan soil for a full series in 2002. They played a 2-match Test series and in the first Test, the home team nailed the visitors and the story was not different in the second. In reply to Sri Lanka’s 373 in the first innings, a Muttiah-Muralitharan-less attack reduced Bangladesh to 86 for 7.

Alok Kaplai and Tapash Baisya were playing their first Test and very little was expected from them as the possibility of a total less than hundred loomed largely.

Kapali and Baisya decided to fight back and spent time at the crease as the Bangladeshi resistance seemed slow and painful, but at least, they conveyed the message to the top order, if a batsman stays at the crease, scoring runs was never a tough task.

Baisya and Kapali found the gaps and fetched runs and when both of them, settled down, some sweetly timed boundaries were seen. Baisya scored a maiden Test half-century, while Kapali’s stubborn resistance of 39 runs failed to save the follow-on.

Bangladesh fell nine runs short as Jayasuriya, who picked up three for 17 with his orthodox slow left-arm, finally ended a fine stonewalling effort from Monjural Islam; the left-hander recording a 72-minute duck before being caught behind.

The Bangladesh tail put up a rare display of patience amid the tendency to play more shots.

Sri Lanka did not enforce the follow on at Sinhalese Sports Club Ground and  Sanath Jayasuriya, the Lankan captain, declared at tea on the third day, leaving Bangladesh the unlikely task of chasing 473, or surviving seven sessions.

Sadly, Bangladesh’s reply was shaky as they lost three wickets quickly. But Tushar Imrana and Mohammad Ashraful took inspiration for the Bangladesh tail and stitched a 59-run partnership for the fourth wicket. Ashraful added 68 runs more with Kapali for the fifth wicket and as soon as soon that partnership was broken, the visitors succumbed quickly as the last five wickets fell for just 17 runs.

Ashraful spent 154 minutes at the wicket and was comfortable both on the front and back foot. He hit 12 boundaries to notch up a brilliant 75, but it was not enough to arrest a whitewash.

At the start of 2005, Bangladesh registered their first ever Test and series win. In the same year, they travelled to Sri Lanka for another 2-match Test series and this time around the hopes were high. At the end of the day, the story was the same.

In the first Test at R Premadasa Stadium, Colombo, the Bangladesh captain dished out a superb exhibition of onside-stroke-play. He came at the crease when the debutante Shahriar Nafees was dismissed cheaply and from the word go, Bashar’s wristy shots became a matter of sheer joy for Bangladesh fans.

Even though, Bashar loved to execute the hook and pull shot, in that particular innings, the leg glance became one of the most productive shots for him as anything around the pad, was sent to the onside boundary.

He was dismissed for 84 off 96 balls which included 12 eye-catching boundaries. As soon as he was dismissed, Bangladesh lost their way and in the end, they lost the Test as well. In the second innings, they were bundled out for just 86.

At the age of 19, Shahriar Nafees was rushed into the Test squad. He toured England and made his ODI debut in England, where he fared well to become the talk of the town and even was dubbed as the future captain by the then Under-19 coach, Richard McInness. He made his Test debut in 2005 against Sri Lanka at R Premadasa Stadium and failed to prove a point.

In the second Test at P Sara Oval, Bangladesh were following on in their second innings and at 56 for 3, another disgrace was on the cards. Nafees came out to bat at number four and added 75 runs for the fourth wicket with another Naffes from Chittagong.

Shahriar was dismissed for 51 which could have been even bigger a score if he decided to curb his attacking instincts a bit more.

Finally, in his second Test, Nafees, made a mark and his hay days lasted for another three years.

It was changing times in the Bangladesh cricket fraternity. Despite a satisfactory ICC World Cup in South Africa, Bangladesh decided to move on with Mohammad Ashraful as the captain. Under Ashraful’s captaincy, Bangladesh toured Sri Lanka for a 3-match Test series.

When Bangladesh came out to bat in the second innings, they were at risk of another disgrace. At 78 for 5, it was a matter of time for the home team to finish the match as early as possible.

Little Mushfiqur Rahim and Mohammad Ashraful decided to earn some respect. Both of them frustrated the Sri Lankan bowlers and stitched a partnership of 191 for the sixth wicket.

Bangladesh lost the last five wickets for just 30 runs and lost the match.

Ashraful lost the captaincy after the defeat against Ireland in the World Twenty20 in 2009. Since then, his position in the team was always under risk and whenever he was given an opportunity, he would waste it by exhibiting some unnecessary strokes which triggered anger among the fans.

He was given another opportunity to save his career in 2013 in the first Test against Sri Lanka at Galle. Bangladesh were in trouble when he came out to bat and when he had just adjusted his focus, Anamul Haque departed. But Ashraful remained unfazed by the fall of wickets and batted on, on and on to announce, he was not finished yet.

He was dismissed ten short of a double ton, but at that point, he established his place in the team which was wasted yet again due to match-fixing scandals a few months later.

A double ton for the skipper

The Bangladesh fans were left to rue about Ashraful missing a double ton, but they did not have to wait for such a feat long as Mushfiqur Rahim, the Bangladesh skipper, notched up a double hundred for the first time in Bangladesh’s Test history.

On a track which was ideal for batting, Mushfiq decided to spend as much time as possible at the crease and while doing such, he spent 437 minutes at the wicket and hit 22 fours and 1 six to register 200 runs to his name and helped Bangladesh to post 600-plus runs for the first time.

Bangladesh drew the first Test and it was a massive improvement from the previous Tours. 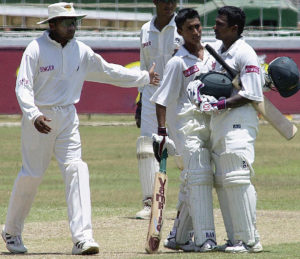 The second match of the 2001-02 edition of the Asian Test Championship was between Bangladesh and Sri Lanka. Bangladesh landed on Lankan soil after digesting a heavy defeat against Pakistan at Multan. On a flat deck, Jayasuriya won the toss and invited the visitors to bat. But Bangladesh were bundled out for 90 and when they came out to bat in the second, Sri Lanka were leading by 465 runs.

Muttiah Muralitharan made life difficult for the Bangladeshi batsmen. The visitors were reeling at 81 for 4 when a 16-year old emerged into the scene. He attacked Murali, executed some brilliant late cuts and didn’t bother to come down against the spinners to smash boundaries. He received very good support from Aminul Islam and Naimur Rahman as Bangladesh earned respect by ending the innings with their heads high.

The 16-year old Ashraful spent 248 minutes at the wicket and hot 16 boundaries to script an epic knock of 114. Ashraful was Test cricket’s youngest centurion and broke Mushtaq Mohammad’s record.

CricketSoccer Desk - April 15, 2021
0
Phil Foden, whose goal at the end of the first leg had given Manchester City the edge, all but settled the tie when he fired a shot in off the post with 15 minutes to go – City held to the lead and after the final whistle, the Blues were delirious.

Zinedine Zidane tames Liverpool at their own backyard

Let us know about Metinho