Neither team reached 300, and four of eight completed innings totaled less than 200 a piece. The lone century, scored by Australian captain Steve Smith, was aided by a number missed chances. Unusually, in this era of big bats and big hits, and for a game with David Warner in it, the scoring rate was mostly pedestrian and there wasn’t a large supply of sixes, though Mitchell Starc slammed six of them in the first Test. Batsmen –  even those of the caliber of Kohli, Smith and Warner – poked and jabbed and played and missed.

Only on a few occasions did batsmen play with any measure of fluency. And yet, nobody in their right mind would argue that The first two Tests of the India/Australia series were anything but highly gripping, highly entertaining affairs.

Though it was always the case, these two games provided ample evidence, if any were needed, that a good game of cricket need not feature a flurry of boundaries and a lot of runs. The action was spellbinding from start to finish. In fact, a number of fans and pundits, and even a few participating players, have publicly listed the games as two of the more cherished in their experience.

For this we should thank the “Raging Turner.” Neither at Pune nor at Bengaluru, batting was an easy task. Both offered significant turn, irregular bounce and a fair degree of uncertainty to teams suitably armed for the contests and the conditions. The result was two bruising battles that have left us salivating, like Pavlov’s dogs, for the two games to come.

The hosts have often used a simple formula for success at home. The equation often went like this: turning tracks + Ashwin, Jadeja and probably one other spinner + batsmen who will score more than their opponents, given that visiting bowlers are usually less capable in the conditions = victory, usually on the third or fourth day.

As the series approached, few forecasters gave the touring Australians a smidgen of a chance of winning. Recent excursions to Sri Lanka told the story of a side ill-equipped to thrive in the subcontinent environment. But the past does not always predict the future, and, additionally, the staffing of the current side is significantly different from the one that went down in Sri Lanka.

India has attracted some flack, in recent years, for an inclination to prepare wickets that turn from the first day, on which they generally flog visiting teams. This time, however, the Australian slow bowlers showed they would be as devastating as their Indian counterparts.Not many observers would argue that Lyon and O’Keefe are as proficient as Ashwin and Jadeja; India’s main slow bowlers have formed a formidable pairing in home conditions. But those conditions, in effect, equalized the potency of each bowler, granting even the usually ordinary spinner the potential to be as troublesome as the world beater.

The story so far hasn’t been only about spin bowling, however. Stephen O’Keefe, Nathan Lyon, Ravichandran Ashwin and Ravindra Jadeja have all been highly effective. But the pacers have had their moments too. We have witnessed blazing pace and toe-crunching swing with the new ball from Mitchell Starc, demanding accuracy from Josh Hazlewood, and pace allied with incisive contrast swing from Umesh Yadav and Ishant Sharma.

Both games, but especially in the Bengaluru Test, grabbed and tightly held on to the attention of the entire cricket community. Every session was a story. Every story supplied drama and intrigue worthy of the best Hollywood or Bollywood could offer. And every scene was played out on a 22-yard strip that facilitated the kind of theater we were fortunate to witness. 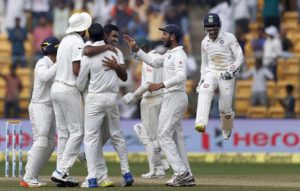 Far from diminishing the quality of the games, sporting tracks frequently seem to breathe life into them. Rather than engaging in run-scoring festivals, batsmen have to plumb the limits of their abilities to survive while still on the lookout for runs. On such surfaces good fortune will have a bigger role than usual, but observing batsmen calling upon all their skills in order to stay alive can make for tantalizing viewing.

It is also the case that more difficult wickets make for more unpredictable encounters. And, while it is not suggested that minefields be deliberately and regularly prepared — that would be taking things much too far – unpredictability generates excitement and heightens suspense.

With the big bats, shorter boundaries and a rule changes and modifications favouring the batsman, cricket has become a more thankless game for bowlers. The wicket that brings the bowler back into the game, as opposed to having them serve a mere cannon fodder, adds much to the game as a contest.

Viewers might not see the ball climb into the stands as often, and batsmen may not be able to have things their own way as they often do on good wickets. But, matches played on sporting wickets are frequently far more fascinating than the heavy-scoring exhibitions that sometimes bore us to death.