For the entire cricket fraternity of Bangladesh, March 15, 2017 has become a special date now. Finally, after a long wait of 17 years, their Test side has touched the three figure mark in terms of number of games.

However, since starting their journey in the longer format, the Tigers have had an inconsistent outing. Only eight Test victories in past 99 games is not a good record to have. Also, apart from the historic triumph over England last year, most of these victories have either come against a lower ranked Zimbabwe or a depleted West Indies.

So, the occasion might be a huge one for the youngest Test playing nation, but it is high time for Mushfiqur Rahim’s boys to buckle up and take their game to the next level, this is what Nazmul Abedeen, Bangladesh Cricket Board’s (BCB) game development manager and one of the most respected figures of Bangladesh cricket had to say in an exclusive interview with Cricketsoccer.

“It [The occasion of Bangladesh playing its 100th Test] has been a mixed feeling for me. On one side, I am feeling proud that we are playing our 100th Test match, but on the other hand, it is disappointing to see it took as long as 17 years for us to reach this milestone. But I hope this is the start of a new era,” Abedeen, who has been a mentor of former BKSP and current Elite cricket coach Nazmul Abedeen Fahim, who also happens to be the mentor of Shakib Al Hasan, Tamim Iqbal, Mushfiqur Rahim, Liton Das and many other local and national Bangladesh cricketers, was saying over phone from his Dhaka residence. 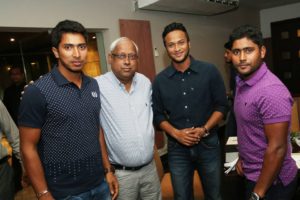 “Inconsistency is our problem in Test cricket. We do not tend to appear on a regular basis. Sometimes we didn’t play Test cricket for years. That is not the way a team can be developed for this format,” he added more.

Another issue Abedeen pointed out regarding Bangladesh’s inconsistency in the longer format is, the lack of competitiveness at the domestic First-class tournaments in Bangladesh.

“In India, in Ranji Trophy, if Bombay [Mumbai] play against Delhi or Karnataka, players from both teams automatically get motivated to perform. They face the performance pressure. Similar rivalries are in place in other top domestic structures as well. But this particular competitiveness is missing in Bangladesh. In our domestic structure, players also score hundreds, take five-fors, but the emotional involvement for playing their respective Zonal teams are missing, which is very very important.”

From the fans’ point of view, red ball cricket is exactly the most popular version in Bangladesh. The action-paced limited-overs formats are more accepted by the fans, or in some cases, by the players as well. But according to Abedeen, this culture is changing now.

“General interest about Test cricket is growing in Bangladesh. People have started to track the whereabouts of the Test team. They want the team to do well. Fan involvement is very important.”

Meanwhile, this year Bangladesh are playing more than 10 Tests and most of those are away assignments. Abedeen believes, such landmark years will be very for Bangladesh to develop as a Test side. He also thinks in near future, Bangladesh Test side will earn the respect from the opposition with their performances.

“Currently, I feel we can compete with lower ranked Test teams, like West Indies. But if we get to play Test cricket consistently, I feel we will improve our ranking. I am not saying we will be as good as teams like India, Australia or England, but we can definitely compete with teams like New Zealand, Pakistan etc. — whether it is home or away.”

Ahead of Bangladesh’s 100th Test, there has been a lot of controversies in the media regarding dropping Mahmudullah from the squad in the middle of the series. Abedeen, who has been a vastly experienced mentor for Bangladesh international cricketers, feels the team management should handle a player like him carefully.

“Just before this lean-patch, Mahmudullah was playing his best cricket. He is an experienced campaigner and currently we don’t have much of experience under our belt. So I feel we should treat him carefully. He has good 4-5 years of cricket left in him. One should not hurt his confidence. I am sure he will bounce back soon.”

Finally, while commenting on the team management’s decision of proving Liton as the first-choice keeper in the Test side ahead of Mushfiqur, Abedeen feels while taking steps, the balance of the team should not be disturbed.

“If you see our team combination, I don’t think we have the luxury of playing an extra player [Keeper]. It means, either you have to drop a specialist bowler or batsman, which will affect the balance of the team. I feel all-rounder [keeper-batsman] should get the priority,” he explained.

Our character and Dean and Temba and [Mark] Boucher’s characters of staying in the fight, take it to them, don’t give an inch: Rassie...

I see a Barcelona [side] under construction and a [Real] Madrid [side] in a very good shape, but that doesn’t mean anything: Xavi

I’ve not watched many Barcelona games lately, I have other things to do and watch our games: Toni Kroos