When Steven Smith walked along Indian skipper Virat Kohli into the all-new Test venue, Ranchi’s JSCA International Stadium Complex for the third Test, Australia became the only second country after England to play 800 Tests. England have so far played 983 Tests, West Indies have 520 Tests to their account ahead of India’s 511 Tests.

The inception of Test cricket happened in 1877 when Australia had hosted the England touring party for a two-Test series and the first Test of the series was played on March 15. One hundred and forty years have passed since that historic moment. The first-ever Australian Test side was led by Dave Gregory and the man who wore their first gloves behind the wickets was Jack Blackham.

Charles Bannerman, who went on to play just three Tests for Australia, was the scorer of Test cricket’s first run and also was Australia’s first centurion in the whites. It was Australia who triumphed in the inaugural Test match, beating England by 45 runs at the Melbourne Cricket Ground

Let’s look back at their landmark Test matches:

The Australians finished a century of Tests during the Ashes 1932 when England toured the island for a five-Test series. The opening match of the bilateral series marked Australia’s 100th Test. Unfortunately, the result of the special match went against the Australians as they were thrashed by 10 wickets by England. More importantly, the drubbing came in their backyard.

Thanks to Stan McCabe’s unbeaten 187, Australia pilled up 360 runs in the first innings. In reply, England, who were boosted of three centuries, scored 524 runs and took a lead of 160 runs. England bowling attack led by Harold Larwood bundled out the hosts for 164 runs and had a target of just one run to seal the match.

After another 100 Tests in Australia’s account, there came new Australian side. However, sadly, even they failed to convert a landmark match into a victory. Yet again, the loss had come at home. Australian skipper, Lindsay Hassett’s 92 helped his struggling side go past 200 before they were bowled out for a mere 217 runs.

There were no surprises when the Englishmen came up with another good show with the bat as they went on to take a lead of 103 runs courtesy of a brilliant 156 from Reg Simpson. The hosts did not last even a day when they came out to bat on Day four. Sir Alec Bedser’s five-wicket haul helped England to dismiss the Australians for 197 runs. The visitors chased down their target of 95 runs with eight wickets remaining.

The Australians touched the 300-mark in the third Test against India during the four-Test series at home.  Although they had finally won a landmark Test, it was not an easy victory. Had India’s middle-order batsman Motganhalli Jaisimha not dismissed while they were chasing 395 runs, the result could have gone the other way too. 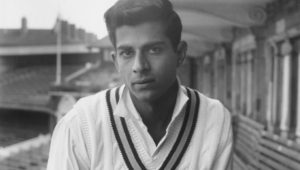 The off-spinner, Bob Cowper, who picked up four wickets in the final innings dismissed Jaisimha and won Australia the game. After the top-order was back to the pavilion, the Hyderabadi batsman the was India’s lone warrior in the middle, who eventually was broken at 101 runs.

Australia hosted the Caribbean’s for a three-Test Frank-Worrell Trophy. Following the loss in the first Test, Greg Chappell and Co regrouped to make a comeback in the second game, which was also Australia’s 400th Test. The West Indian trio of Michael Holding, Joel Garner and Colin Craft struck once again and restricted Australia to a poor total of 156 runs.

In reply, the West Indians earned a lead of 241 runs. The hosts once again managed a low total of 259 and set West Indies a target of just 19 runs before losing the game by 10 wickets.

Pakistan toured Australia for a three-Test series and the unique match was the final game of the tour, which was played at Sydney Cricket Ground. The game, that was expected to be another cracker of a contest similar to the previous games of the series, was ruined by rain. There was no play on the first two days and an extra day was added to make up for the lost time.

Terry Alderman dominated the opponents with his pace and his five-wicket haul saw Pakistan only post 199 runs on the board. The fourth day ended when the Australian innings had just started. The rain had struck again, washing out the fifth day as well. The match eventually ended in a draw as Australia ended the final day at 176 for 2.

This was Australia’s final landmark Test in the 20th century and their first away from home. Zimbabwe played Australia in the one-off Test South Cross Trophy at Harare Sports Club. The likes of Shane Warne, Glenn McGrath and Damien Fleming derailed an unfancy Zimbabwean batting line-up for just 194 runs.

In reply, skipper Waugh remained unbeaten on 151 as Australia posted 422 runs. That was followed by another impressive bowling show by the visitors before they sealed the game by 10 wickets.

The Australians toured India for a four-Test Border-Gavaskar Trophy in 2008 and the Bengaluru Test was Test was the talking point and they were set to become the second country to achieve the feat after their arch rivals England. To make the match more special, the visitors begun with flying colours. The duo of Ricky Ponting and Michael Hussey scored a century each to take their side beyond 400.

A collective effort from the Australian fast bowlers and spinners restricted the hosts to 360 runs, giving Australia a lead of 70 runs. They declared at 288 on the final day, setting a target of 299 runs for the Indian side. The match ended in a draw. 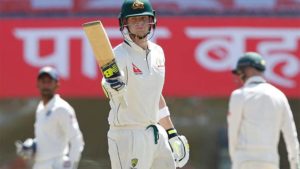 Nine years later, Australia have another milestone match to their name and for a third time in the history, it is against India. Smith is the lucky captain to be leading his country in the extraordinary game. His unbeaten century under pressure has only added more excitement to high-intensity game in Ranchi. Out of the seven landmark Tests Australia played prior to the 800th Test, they managed to win only two.

Let’s see if the Australians can seal the ‘fat 800th’ game.