Test cricket is not everyone’s cup of tea! It is for a reason called ‘Test’ as it is a true test of a cricketer’s diligence, temperament and skills. A batsman making a comeback is always under immense pressure, for the fact that the axe is looming over his head. He is walking on a cliff and one wrong step would send him languishing down the mountain. To make it tougher for any cricketer, making a comeback on foreign soil is the last thing he will demand. Maxwell had a litmus test ahead of him at Ranchi but the manic batsman adapted beautifully to come out in flying colours.

After all the hullabaloo over Steve Smith’s ‘brain fade’ moment in the Bangalore Test, it was time for some intense cricket at Ranchi. Smith got it right at the toss and Australia were more than happy to bat first. David Warmer got a good start, but floundered to a delivery, which he would have sent it into the oblivion had this been Australia. With the pitch playing up in the batsman’s mind, Warner gifted his wicket away to Jadeja off a full toss as India drew the first blood. Matt Renshaw once again got a start but failed to convert after which Shaun Marsh was undone by Ravichandran Ashwin.

Peter Handscomb’s promising run was ended by a peach of a delivery from Umesh Yadav as Indian pounced back into the game. Australia were in a delicate position at 140 for 4. This is when Maxwell walked out to bat. Things were rather simple, a failure at this juncture would have indubitably ended Australia’s chances of sealing the series. But Maxwell produced a gem of an innings, which had its share of glitches, to sail the Australian ship out of choppy waters and put his side in command. Maxwell and Smith stitched a match-defining 159*-run partnership as Australia ended Day 1 at 299 for 4. 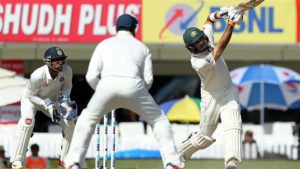 The job wasn’t done. He was on the brink of achieving a milestone, his maiden Test ton. Next morning, Maxwell did the unexpected. On 99, Maxwell lashed out at a short of a length delivery, which flew over the slip cordon for a boundary. For a moment, his heart would have been in his mouth, but as soon as the red cherry kissed the boundary rope, Maxwell was relieved. He knew what he has done and so did his skipper at the other end, who was overwhelmed by his performance.

Maxwell looks unorthodox, his forward defence in no way gives you an impression of a Test player. But, he exhibited some serious temperament and the scorecard is there to speak for the results.

Maxwell was the talk of the town when his remarks on batting below his Victorian skipper Matthew Wade, made rounds on the social media. He feared that batting lower down the order might hamper his chances of being recalled in the Test side. And here we are, Maxwell is batting above Wade in Baggy green. Australia were surely making a tactical error by playing Mitchell Marsh in conditions, which wouldn’t suit his style of bowling. If conditions assist, Marsh could well be the back-up seamer, but ended up bowling just five overs in Bangalore before not putting any hard yards in Pune.

After Marsh’s tour-ending injury, Maxwell’s selection could either be a gamble or a smart move. Australia had very less to lose as not many expected them to even win a game in the Indian backyard. Maxwell was given a rare opportunity after being out of the Test side for three long years, which he grabbed with both the hands. It was likely that a failure here would have put his Test spot in jeopardy with Ashton Agar, Usman Khawaja and Marcus Stoinis warming the bench.

Maxwell played quite a contrasting and uncharacteristic innings. At 140 for 4, India were in the driving seat and an under pressure Maxwell walked out to accompany his skipper put in the middle. Maxwell at stumps on Day 1, saw 147 deliveries, which has never happened in his international cricket career. In fact, Maxwell has never faced 100 deliveries in any format of international cricket. And this was truly an achievement, a personal milestone.

Bowling to a rampaging Maxwell in shorter formats is a bowler’s nightmare. He is an intimidating batsman. His quick reflexes, and ability to manipulate the field along with some exquisite timing stands him apart from his imminent peers. He likes to take on the bowler from the word go, but Maxwell curbed his natural instincts and exhibited a more mature innings at Ranchi, when his team needed him the most. The fact that he endured 56 deliveries before hitting his first boundary corroborates the belief. Also, Maxwell uses reverse-sweep as his go to shot, one can see him executing it with perfection as soon as he takes guard. But, Ranchi was different. He played his patent reverse sweep off Ashwin on the 123rd delivery that he faced but failed to connect as the fielding team appealed for a leg before.

Maxwell has earned a reputation of being a shorter format specialist, but always had the potential to succeed in Test cricket. His First-Class average of 39.60 (excluding the current game) is a testament to his abilities of succeeding in whites as well. Maxwell means entertainment, it’s not an exaggeration. The way he plays cricket will always keep the opposition on their toes for a possible half-chance. But at Ranchi, Maxwell smashed his first six of the innings on the 95th ball, which he faced. He was lucky to get a reprieve while batting on 67, when an appeal for a bat and pad catch was turned down by the on-field umpire but India didn’t review it.

Eventually, Maxwell made the most of his outing by smacking his maiden Test ton and putting Australia in domination. Australia were well placed at 331 for 5 when Maxwell was dismissed by Jadeja for 104. Many believed Maxwell is not made for Test cricket, his aggression doesn’t find any place in whites. But, as of now, Maxwell has silenced his harshest critics with a bang in taxing conditions.

Maxwell is a kind of a batsman who could change the complexion of a game in a span of few overs. The pitch is expected to deteriorate as the game goes on, which is when Maxwell will be crucial. If he could get a quick 40 in the second innings, provided the ball is turning massively, the course of the game will take a huge turn.

Whatever may be the outcome of this Test, Maxwell has left a mark with a stubborn performance on a surface, which was not suited for his style of play. And his partnership with Steven Smith has certainly given Australia an upper-hand as one shouldn’t forget India will be most likely batting in the fourth innings. Given the kind of spin attack Australia have, India now find themselves in hot water with the onus being on them to seal the series with a win here. There is more to come from Maxwell in whites, and behind that belligerent batsman, lies an astute cricketer, who could make his chances count in the longest format.

CricketSoccer Desk - January 24, 2021
0
After a frustrating week, which includes defeat against a third-tier side, the roster against Deportivo Alaves seemed an uphill task. But thankfully, the outcome...