This Australian team was meant to be clobbered 0-4 in the Border-Gavaskar Trophy 2017 at the hands of World No. 1 Team India. With the final Test left in the series, Australia even have a chance to retain the trophy now. A phenomenal win in the opening Test, an almost victory in the surprisingly tricky tracks of Bengaluru followed by a great escape, Australia have fought against the odds and managed to keep the series levelled 1-1 so far.

After batting a little more than two sessions on the final day, when the 25-year-old Peter Handscomb faced the 200th ball of his innings, Indian skipper Virat Kohli shook hands with him, giving Australia a deserved draw. According to the commentators, Kohli ended the game mere three minutes before the Australian declaration – regardless of who declared first, the visitors pulled off a massive comeback in a game that looked to be India’s until Day four.

The baby-faced Handscomb did justice to everything his skipper Steven Smith had said prior to the series. “Obviously you want to win first and foremost, but a draw’s a much better result than a loss. If the game’s dead and buried and we can’t win, you want to see the fight and the willingness to put your natural game away and do everything you can to stay out there and get a draw,” Smith told Cricinfo.

Some hard fought cricket today by Australia,@phandscomb54 and @shaunmarsh9 standing up for their country when they needed it most. #INDvAUS

Handscomb, who was supported by the experienced Shaun Marsh in most of the day, left the cricket fraternity in awe when he looked absolutely untroubled on the final day; not once did his body language suggest that the young lad was under pressure. His learning graph has surely rocketed in Test cricket in a very small span of time.

When seniors like David Warner, Smith and Glenn Maxwell stumbled against the World No. 1 Test bowlers, Ravindra Jadeja and Ravichandran Ashwin, Handscomb displayed maturity in selecting shots, great character, and concentration, that was intact till the final minute of the match. His footwork almost never went wrong in the five-plus hours he batted on Day five.

A young lad stepped up

The current series so far has witnessed a collective effort from the Australian clan. Barring the Bengaluru collapse in the final innings, at some point in time, they have witnessed a player taking charge during a crisis. Australia were outplayed both physically and mentally by Cheteshwara Pujara and Wriddhiman Saha on the fourth day of Ranchi Test, when the duo put up 199 runs for the seventh wicket, taking India from 328 for 6 to 527 for 7.

That was followed by the visitors losing two wickets before stumps.

Just when Matt Renshaw and Smith looked to settle down on Day five, Ishant Sharma struck, removing the opener. Two overs later, Smith suffered another “brain fade,” left the delivery bowled by Jadeja that uprooted his off-stump. At 63 for 4, Handscomb joined his senior Marsh and the two had a huge task of batting out in the day to force a draw in the Test. 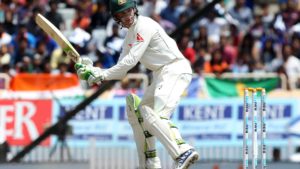 Australia fielded for 210 overs before they batted for the second time in the game. After the Indian innings ended, there was a break for a few minutes and soon after that, the two Aussie openers walked out to take the field again. This time with the bat. It goes without saying that the players would have got drained and exhausted.

Although Handscomb received an overnight break, he, like his other teammates, would have had a disturbed sleep, thinking about the Test that was slowly slipping from their hands and more or less, it was a must-win game for both the sides.

Although the six-Test-old Handscomb was short of experience, he possessed all the qualities of a superb Test player. He along with Renshaw made Test debuts in a dramatic manner when a few senior players were axed and these two were roped in following a Test series lost against South Africa at home. He made a fifty in his maiden Test innings and registred his first Test century in his third innings.

Brilliant performance by Peter Handscomb and Shaun Marsh today against a brilliant Indian bowling team. #greatTest
Now for a ???

Ever since his debut in November 2016, Handscomb has maintained consistency, which is the top-most priority in international cricket. Considering the performances in his first two Test series and during his first India visit when he represented Australia A, selectors picked him for the crucial India tour. And to everyone’s delight, he did justice to the faith Cricket Australia and his skipper had shown in him.

The fact that the current Indian side is one of a kind in the recent times has been heard numerous times. However, it is proved that Australia is no less; with the likes of Handscomb, Renshaw, Warner, and the skipper himself, Australias have finally found a set of promising boys in the Test side. They have gotten back their aggressiveness and the hunger to win in their team – the qualities that have always defined an Australian Test team.

At an intense situation like this one, Australia were lucky to witness a youngster saved the game and kept the series locked at 1-1. The manner in which the Australians marched back into the game would have given them enormous contentment ahead of the cracker decider in Dharamsala.

Who is Ryan Mason?

CricketSoccer Desk - April 22, 2021
0
But on Wednesday, that boy from Enfield, who dreamed of achieving something big through playing football, certainly, thought that after the tragic end to his career, his passion for the game has rewarded him with something big – Mason has the strong mentality to move on and work harder to improve. The 29-year-old can be an asset to football.

Maybe we didn’t explain it well, but they also didn’t give...