There have been a few players in the history who hold a significant place in the Indian cricket team. It goes without saying that Rahul Dravid and VVS Laxman are among them. Their unique qualities kept them apart from the rest of the players. Dravid could frustrate the bowlers with his ability to bat for an unbelievable number of hours, while Laxman was India’s most dependable crisis man. When the two got together, Australia knows best what they were capable of. They shared numerous partnerships to pull India out of a miserable situation in Tests and coincidentally, several of those came against the Australians.

While Dravid and Laxman served India, series after series— there was a cricketer in Saurashtra who was getting ready to hit the international arena. The name Cheteshwar Pujara was gradually becoming popular, thanks to his consistent performances in the domestic circuit. He had the selectors’eyes on him whenever he walked out to bat in First-Class and List A matches.

The rise of Pujara

In #2012 waiting to see our young talent suryakumar yadav, manish pandey,manoj tiwari and cheteshwar pujara back in team india #cricket

Pujara was as simple as the two senior men. While Sourav Ganguly and Sachin Tendulkar were the charming names in that era, their teammates, Laxman and Dravid preferred staying away. They had restricted themselves to their family, training, and scoring runs for India. It is just a twist of fate when their successor, Pujara, happened to have similar qualities like them.

Even before the legends had retired, Pujara made his way into the Indian team. Considering Laxman and Dravid were Australia’s nemesis, it was interesting to watch Pujara play his first Test against the same opponents. He touched many hearts when he displayed the same old textbook technique; he stuck to his basics; he never looked in a hurry and more importantly, he had the knack of frustrating the opposition’s bowling attack by defending almost every delivery. In 47 Tests, he has already faced 7000+ balls.

In 2012, the legends bowed out of the game, leaving India with a huge void to fill. Dravid and Laxman were among the few cricketers who are adored across the globe, regardless of the nationality – the connection is – the love for Test cricket.

Although India never found a second Dravid or Laxman, India has discovered a first Pujara!

Pujara needed six innings to get his maiden Test ton. He reached the triple figures in Hyderabad during the 2012 New Zealand series. It was India’s first Test series without the duo of Laxman and Dravid. While the latter retired earlier that year, Laxman called it quits from the international cricket, despite being chosen for the New Zealand series.

Pujara, who has scored three Test double-centuries, had struggled to find form at times. He was in a dry spell of Test hundreds for almost two years from 2013 to 2015. That led to discussions about replacing him with the Mumbai opener, limited-overs specialist Rohit Sharma. Then new Indian skipper, Virat Kohli, had eventually made the harsh call and Pujara was dropped after the Sydney Test in 2014.

The likes of Rohit, KL Rahul, and Ajinkya Rahane made way to the Indian top-order. While Rohit failed to do justice to his selection, Rahane etched his spot in the No. 3 spot and Rahul also managed to retain his place.

However, the tables turned in 2015 and Murali Vijay’s injury saw Pujara’s return to the Test squad. He was roped in for the decider Test of the three-Test series in Colombo. Although he was without a century in 22 innings, he made the best use of the opportunity and took off his second stint in the India team with a match-winning century. In the third and final Test, out of the 312 runs India posted in the first innings, 145 belonged to Pujara. India won the series and Pujara was the Player of the Match in his comeback Test.

Ever since then, the 29-year-old batsman has been a regular face in the Indian Test team. His latest heroics came during the ongoing Border-Gavaskar Trophy 2017. Against everyone’s expectations, Australia have managed to be neck to neck with the home-dominant Indian team. In the second Test, when the Australian bowlers again derailed the Indian batting line-up, Pujara was the only Indian who could fight against the ruthless Aussies for the longest time. He batted for almost 300 minutes, faced 221 balls and scored the crucial 92 runs. That helped India set Australia a target of 188 runs before winning the match by 75 runs. 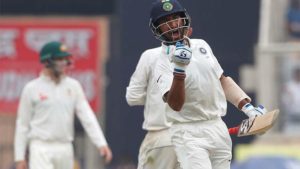 The series was levelled 1-1 before both the sides reached Ranchi for the third match. The previous two Tests saw Steven Smith’s Australia dominate the hosts in all departments. So, it was not a surprise when they piled up 451 runs in the first innings, followed by an excellent bowling show until Pujara walked into the field.

Pujara batted close to six sessions in two days and thereby drained out Smith and Co both mentally and physically. The Australians, before coming out to bat for the second time, had been on the field for 210 overs. It goes without saying the visitors were exhausted. Pujara made and broke records during his third Test double century. He became the first Indian batsman to face 500 balls in Tests.

According to the Mumbai Rent Act, @cheteshwar1 would probably have got possession of the pitch based on tenancy laws!

He faced 525 balls — the most by an India batsman in Test innings. The previous record was Dravid’s 495 deliveries for his career-best 270 in Rawalpindi in 2004.

In the home series against Australia so far he has individually played Dravid and Laxman’s role. He has not only pulled India out of miserable situations but also has stood strong in the middle with the bat like a wall and has guided India to the right direction whenever required, bringing back sweet memories of the legends during their playing days.

When India is in a crunch position, one thinks of Kohli, Jadeja or Ashwin to take India past it. Even after seven years of Pujara’s Test debut, cricket fans somehow lack faith in him. He has never had the luxury to become the hot topic in town for a knock he played for India. Not that it bothers him. He has liked better when his bat does the talking. His sincerity, hard work and perseverence has finally paid off. According to the latest ICC Test rankings, Pujara has jumped to career-best No. 2 spot behind Smith, ahead of Joe Root and teammate Kohli.