Prior to the start of the Test series, not many would have imagined Australia put up a fight and give themselves a chance against the unstoppable and high on confidence Indian side. After an overwhelming win at Pune, Australia lost the game at Bangalore but did well to save the day at Ranchi and now they stand an equal opportunity of winning the series with a game to go at Dharamsala. Australian hard-hitting opener, David Warner was expected to do well with his belligerent approach and get the team off to a good start on most of the occasions, but it wasn’t to be.

Cricket is a cruel game, there is hardly any room for errors at this stage. Once a player sets a benchmark for himself, then he is being gauged on those set parameters. Warner certainly raised the bar after a prolific run at home and now, his bare runs column overseas is hampering his reputation in Test cricket. Critics have not spared a moment in lashing out on an underperforming Warner, who has rather been ordinary in the ongoing series.

Also read: Australia will need a responsible David Warner to step up against India

In the ongoing series, Warner scores read – 38, 10, 33, 17, 19 14. The numbers are not something, that one expects from the likes of Warner. He likes to score big and when he is batting in Australia, and bowling to a rampaging Warner is a bowler’s nightmare. It’s not an exaggeration, his strike-rate across formats is a testament to it. He is oozing with confidence while batting at home but has looked bereft of oomph in the subcontinent in the last two series.

The competition between India’s frontline spinner Ravichandran Ashwin and Warner is well-known, in fact, India have targeted Warner with Ashwin on most of the occasions in the series. Indian started the proceedings with Ashwin on four occasions, with the primary reason being two left-handers at the top and Warner’s vulnerability against the spin. Ashwin did deliver as he got the better of Warner three times and the latter only managed 50 runs against him, while Renshaw didn’t fall prey to Ashwin’s persistence early on in the innings.

Many cricket followers were knocked down by the feather then Australia were whitewashed in Sri Lanka in a three-match Test series. Australia were at sixes and sevens and Warner was one the talks of the town for his awful form in the series. Warner garnered only 163 runs from three Tests, Worthing which he could have achieved from a single outing in Australia, and averaged a paltry 27.16, with his highest score being 68 on that tour. Out of the six innings, Warner was dismissed on five occasions by spinners with a solitary one being by a pacer. This speaks about his struggle against tweakers and some serious technical flaw in counterattacking them.

Saying that Warner has scored runs on a consistent basis at home would be an understatement, and the fact that he averages 59.21 in Australia, corroborates the belief. To add to his good fortunes, since April 2014, Warner has been a dominating at home, smashing nine centuries at a staggering average of 65.60. Warner takes the opposition by storm back there in Australia, where there are pace and bounce, which surely suits his style of batting. In the current series, Warner’s fortunes have been similar to that in Sri Lanka. Spinners have got the better of him five times, while Umesh Yadav got rid of him in the first Test. 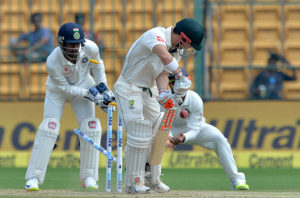 Warner’s Achilles’ heels in the subcontinent against the red ball was exposed, and he has had a terrible time in the series so far. His failure at the top has hurt Australia massively, as he is one of the few veterans in the side and carries massive responsibility on his shoulders. He has not shown any signs of improvement in the subcontinent since his failure against India in 2013. He looks technically unequipped to confront spin, which has been a massive drawback for him while playing in the subcontinent.

Warner’s opening partner Matt Renshaw, a 20-year old kid with hardly any competitive experience has done reasonably well in the series so far. In fact, his temperament and technique against the spin has earned him accolades from many cricketing greats in the fraternity. Renshaw averages a modest 37.16 as compared to Warner’s average of 21.83 in the ongoing series.

Without a doubt, Australian skipper Steve Smith and Warner are two big names in their country, they have been a force to reckon with and have scored runs at will. Smith has led the side with example and been prolific in the series so far, averaging 74.20 with two centuries to his name. Warner, on the other hand, has rather been mediocre. It’s not that Smith didn’t struggle in Sri Lanka, he did. But he was astute enough to spot the error and work on it for the tour.

Warner’s run on foreign soil has been insignificant in the recent times. In his latest three series on foreign soil, Warner has crossed the 50-run mark on just a solitary occasion. The deficit between Warner’s home and overseas average is 22.4, which is huge for a fifth rank Test batsman in the world. Warner has played against five teams away from home since April 2014 in which, he has averaged below 30 against four of them.

Warner still has a golden opportunity to silent his harshest critics in the fourth and the final Test with the series being evenly poised between both the teams. Both the teams will look to come out hard and walk away with the glory and Australia will be posolutley wanting their lieutenants to come out all guns blazing.

These situations are overcome with results. We will continue [looking] forward...