Ajinkya Rahane gave his fellow Maharashtrians a beautiful gift on the auspicious occasion of Gudi Parwa, their New Year. A series win against Australia is always sweet. To make it more special, India won the series decider under the leadership of Rahane. He joined the league of Mumbai legends like Sachin Tendulkar, Sunil Gavaskar, Ravi Shastri, Polly Umrigar, Nari Contractor, GS Ramchand, Ajit Wadekar and Dilip Vengsarkar when he became India’s 33rd Test captain. He took up the responsibility in the absence of India’s best player and captain, Virat Kohli, who was ruled out of the Dharamsala Test with a shoulder injury.

Congrats to India on a wonderful series win, it was a great series to watch. Well done to the Inexpierienced Aussies too who fought hard ! ✔

Prior to the fourth and final Test, India and Australia had locked the series at 1-1 so the winner in the Dharamsala match would go on to lift the coveted Border-Gavaskar Trophy. Australia was easily India’s best opponent in their 2016-17 home season. Steven Smith and boys did not have the word, “giving up” in their dictionary and which is why even after they lost the Bengaluru Test, they bounced back in the third Test in Ranchi.

It was an insistent Kohli who ensured India had answers to every Australian attack in the series.  Be it on the field or in a press conference, he always had a way to get India at par with the visitors. After going down 0-1 in Pune, Kohli’s boys recovered strongly by levelling the series in Bengaluru. It goes without saying that Australia are the most aggressive side in Tests and what worked for India was Kohli returning the favour by providing them with the taste of their own medicine.

Hence, Rahane was aware of the amount of responsibility that would be subjected to him when he walked in the Dharamsala ground with Steven Smith for the final toss of the series. It was the series decider game. He was filling in huge shoes; he was filling in Kohli’s shoes; that would certainly bring immense pressure on the 5 ft 8 in short cricketer.

His first task was to choose the right replacement for India’s best player, Kohli. He could either go with a batsman or pick the fifth bowler. When he had a chat with Kohli regarding this and without any hesitation, he immediately chose the five-bowler strategy. By doing so, he gave the message loud and clear that he was going to step aside from his usual calm character; take the aggressive way and look to bowl out Australia in both the innings.

An instant hit as Indian skipper

Rahane’s aggressive captaincy pushed the Australians to an edge which saw them making no comeback in the game. Rahane’s five bowlers ‘strategy included the game changer, Kuldeep Yadav, who lived a fairy tale Test debut in Dharamsala. Australia had not seen much of Kuldeep, they played him for the first time and the trick worked for India. From 130 for 1, Australia were bundled out for 300 in the first innings.

The collapse surely demoralised the visitors, who lasted only 53.5 overs in the second innings and set India a target of 106 runs.

There was not one moment when Rahane was seen under pressure in the match. On my occasions, he chatted with the other senior player, Cheteshwar Pujara, before he made a crucial bowling or field position’s change. Meanwhile, the new captain kept his favourite fielding position for himself; he set the fields and guided the team from the slips; retained his calmness and finished all the four catches that came to him in both the innings.

It was an important task at hand, glad that the team supported me for the ultimate result! Thank you everyone who believed in me and Team. pic.twitter.com/q2VtvwWFZZ

He let his bat do the talking. In the first innings, he added vital 46 runs and in the second innings, he remained unbeaten on 38. While chasing 106 runs, India lost Pujara and Vijay early in the innings. Rahane joined KL Rahul in the middle in the 14th over when India were 60 runs away from a win.  In his captaincy debut, he remained not out on 38 off 27 balls and the strike rate of 140+ was his highest in any Test innings. Rahane’s scoring rate is also the second-highest for an India batsman in the fourth innings of a Test batting 25 balls or more.

The Mumbaikar had played just four Tests since he returned from an injury. The way Rahane stepped up in the Dharamsala Test, be it as a captain or India’s dependable batsman, he showed great character in everything, assuring India that they no longer solely depend on Kohli to win a Test. At the end of the match, he has something even Kohli does not have – a win in the first Test as India’s captain. As Ian Chappell said, India is lucky to have a stand-in skipper like Rahane.

After Rahane’s impressive run in Dharamsala, he surely has earned the tremendous faith of Kohli and head coach, Anil Kumble. In the upcoming Tests, a combination of Kohli and Rahane’s brains will conquer the opponents.

For every Kohli in the side, you need a Rahane to bring in balance. The relationship between Kohli and Smith had taken a toll after the DRS fiasco in Bengaluru. There were cheeky on-field banters and heated press conferences in the bitterly fought Test series between the arch rivals. The fire turned off between India and Australia when Rahane and Smith were seen having a delightful chat at the end of the decider Test. 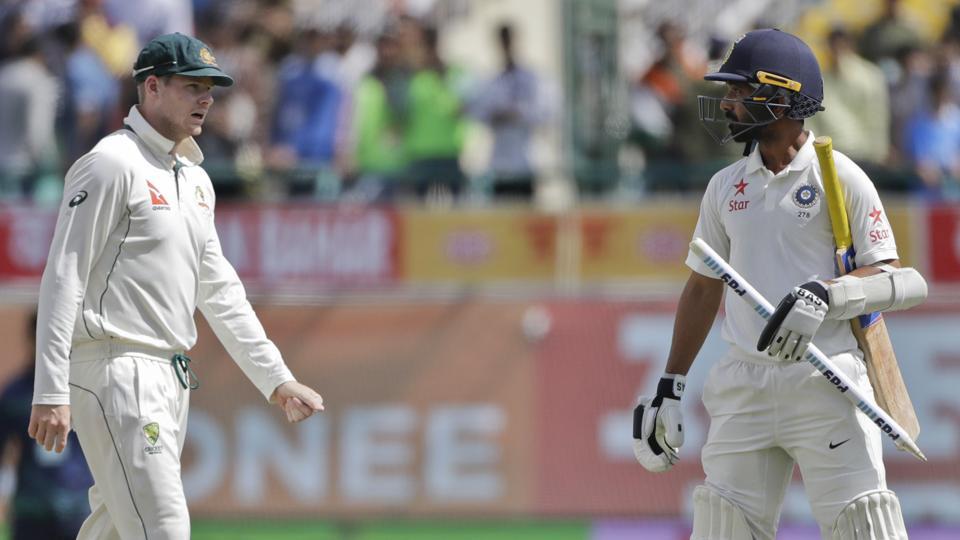 While Kohli bashed the Australians in the final press conference, saying he no longer will be friends with these opponents, Smith apologised for his emotions getting the better of him in the closely fought series. “I asked if he wanted us to come in for a drink being at the end of the series. He said he’d get back to me. With Ajinkya, we get on well. He’s in my IPL team so I’ll be with him for the next few weeks,” Rising Pune Supergiants captain Smith said.

Meanwhile, former Australian captain, who was among the several impressed by Rahane’s captaincy debut, tweeted, “Rahane should stay as [India’s] captain! It was a tough series but I believe it should stay on the field with the players.”

Sometimes moving on is the best. Either that or you remain like Rahane, whose aggressiveness came out only via his field set ups, tricky bowling changes, surprise Test debutante in the team and a superb performance with the bat. Kohli might learn a thing or two from his vice-captain, maybe!