Indian Premier League is no less than a festival in the cricket fanatic country. The tenth edition of cash-rich extravaganza is couple of days away and the anticipation level for the same has scaled newer heights. IPL has turned out to be a boon for the domestic cricketers, providing them a platform to perform and flash their talent on the grandest stage of franchise based T20 tournament. IPL is such an event, where teammates become rivals and vice versa, it helps in building camaraderie, which further enhances the gentlemen’s game. Creating a dream XI is many cricket fans’ fantasy and a gratifying quest. With the action-filled IPL on the way, we present you a dream XI from the current edition.

Seldom will have any doubt regarding Rohit Sharma’s talent and ability to weak havoc in a format of uncertainties like T20. For such ability of his, Rohit is affectionately known also known as Rohit ‘Hitman’ Sharma. Though consistency has been a huge drawback for Rohit but he is a star when it comes to IPL. He is the third-highest run-scorer in the history of IPL and surprisingly, also has a hat-trick to his name. Rohit can step his foot on the accelerator at any juncture and can get his team off to a flying start in the powerplay overs. Not many would like to miss out on him as an opener of a T20 side.

None needs to speak about Virat Kohli’s prowess against the white ball. Saying that he is a rockstar in the IPL would be an understatement; he plundered a record 973 runs in the 2016 edition, at a blistering strike-rate 152.03. He is also the highest run-scorer in the IPL, having overtaken Suresh Raina convincingly in the last season. Kohli can easily make it to any All Time XI and will easily retire as one of the greatest to have embraced the game. Kohli had a prolific run in the home Test season and is expected to wreak havoc in this edition as well. Though he will miss out on first few games due to shoulder injury, but the elegant batsman won’t waste any time in setting the stage on fire once he takes guard. Kohli will also marshal the side as he has successfully done it for India in his sporadic appearances. Kohli and Rohit together is like a double-edged sword.

IPL sounds incomplete without Raina! For the fact that he had been associated with it since its inception and has secured a permanent spot in fans mind with some mind-boggling performances in the past. He has been as consistent as sunrise but has not lived upto his standards in last two seasons, which also saw him drop to the second position for most runs in the history of IPL. Raina walks at three and the onus of anchoring the innings lies on his experienced shoulders. Raina can also bowl tight off-spin and can come handy if conditions assist spin.

No adjectives would be appropriate to describe De Villiers mastery with the bat? He is hailed as the most complete and smartest batsman in contemporary cricket and acknowledged as the ‘superman of cricket’. His versatility and ability to score runs in every part of the ground stand him out from his imminent peers. Bowling to a rampaging De Villiers is every bowler’s nightmare, for he can take him out of the park out of nowhere. De Villiers averaged 52.84 in the previous season and one can expect him to replicate his magical performance in this edition as well.

The most expensive buy of the IPL auction 2017, Ben Stokes is force to reckon with in T20s. An all-rounder in any format is like gold, and an effective one is just priceless. Stokes has had a productive season with the bat as well as with the ball, which caught many eyeballs prior to the auction. His bowling is as effective as his batting and can chip key wickets out in the middle. Stokes presence will not only provide depth but also some solid stability in the lineup.

MS Dhoni has been the most successful captain in the IPL, his former team Chennai Super Kings won the title twice and made it to the play-offs more often. His presence will only be an added advantage to the side. Though his current team, Rising Pune Supergiant, had an awful run in the previous edition, but no gloveman can match his skills in contemporary cricket. Apart from that, Dhoni is one of the hardest hitters of the cricket ball and can launch an attack on the opposition with his brute force and finesse.

One of the most impactful all-rounders in the Indian circuit, Jadeja is a utility cricketer. A complete package for any team to have – a guileful bowler, amazing fielder and handy with the bat. Jadeja comes in at No. 7 and can be used a floater if required. Though his primary role will be bowling, but can be used a pinch-hitter if needed. 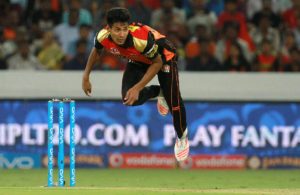 The mystery bowler has been the reason behind many batsmen’s nightmare. His artful bowling is yet to be decoded and is well capable of winning games single-handedly in the death. Rahman is an asset for any side and he also proved his worth in gold for SRH in the previous edition. A death over specialist, the combo of Rahman and Mills will put any opposition in serious trouble when they put in the hard yards together.

Another hot buy from the IPL auction, Tymal Mills was roped by the RCB to address their bowling woes, which has haunted them for a while now. Mills can clock an alarming speed and can outfox any batsman with his astonishing slower ball. Mills has been incredible when it comes to variations in pace, which has also been his primary weapon. Hypothetically speaking: Mills’ shadow reached the batsman quicker than his slower one. His potential and success in this format pips the likes of Lasith Malinga, Dale Steyn and Trent Boult.

A leg-spinner means business in any format, he may leak runs but can consistently chip wickets. Chahal made it to the national side riding on his form in the IPL. The wily leg-spinner was instrumental in India’s victory against England in the recently concluded T20Is, where he also bagged six wickets in an innings in the third game. Chahal will tie up with Jadeja as the second spinner and the partnership between two could restrict the run flow in the middle as well as pick wickets.

Wickets with the new ball are the key in T20 cricket, and Nehra has meant business within the powerplay overs. Nehra brings massive experience into his bowling and has often seen sharing his thoughts with young bowlers in crunch situations. The left-arm pacer is in the twilight of his career but has been bowling with much more energy and grit. Nehra will open the bowling and either Rahman or Mills can share the new ball with him. Nehra gets some early movement with the new ball and has tremendous control with his line and length.

The new edition IPL is knocking at the doors. New heroes will emerge and replace the old ones. But for the moment, I feel, this is the ideal XI from the current players depending on their form and past records.

Opinions may differ, but hey, the choice of a fan is as worthy as gold.

CricketSoccer Desk - March 8, 2021
0
Sunday was all about the Derbies – In La Liga Real Madrid faced Atletico Madrid at the Wanda Metropolitano while at the Eithad Stadium...

What happened to Liverpool?

Madrid Derby: Real Madrid survive in the end by salvaging a...

Only if England exhibited resolve, the outcome might have been different