He was a team man. He arguably remains the best all-rounder produced by India in the last seven decades of Test cricket. He batted at all positions in Test cricket; mostly due to circumstances as he was a part of a weaker Indian team that was without a big name in cricket. His all-round skills made him a key player in the squad as he contributed in some or the other way. When India finally began to show positive results during those years, it was mostly because of his input as an orthodox left-arm spinner, an agile

When India finally began to show positive results during those years, it was mostly because of his input as an orthodox left-arm spinner, an agile fielder, an opening batsman and exhibition of courage. More importantly, his consistency was vital for Team India, the side that was devoid of match-winners.

Mulvantrai Himmatlal Mankad – however, throughout his career he was lovingly known to cricketers by his nickname, Vinoo. He was born on April 12 in a small town of Gujarat, Jamnagar. He began his First-Class career with Western India and went on to represent teams like Nawanagar, Hindus, Maharashtra, Gujarat, Bengal, Saurashtra, Bombay before ending his First-Class career with Rajasthan. In 233 First-Class matches, he bagged a whopping 782 wickets, scored 11,591 runs that included 26 hundreds and 52 fifties.

It took him quite some time to jump to a higher level. After playing 11 years of domestic cricket, he finally got the national call in 1946 and became India’s 30th Test cricketer. India still remained winless for the next 17 Tests since Mankad’s Test debut. They finally registered their maiden Test win in 1952. It goes without saying that India won the match mainly because of Mankad’s excellent spin bowling that ran through a full-fledged England side. The 35-year-old Mankad ensured India’s first Test victory would be massive and special. It was the final Test of the five-Test series at home against England. Mankad’s eight wickets in the first innings restricted the visitors at 266 followed by India’s classic batting. 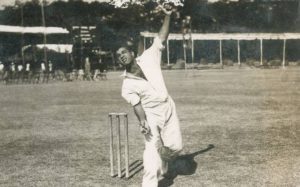 The hosts piled up 457 runs and declared. England, still 191 runs behind, came out to bat for the second time. The duo of Ghulam Ahmed and Mankad, who picked four wickets apiece, helped India bowl out England for a mere 183 runs and win the Test by an innings and eight runs.

At one point, drawly against the lower-ranked sides like New Zealand and Pakistan was considered an achievement for the Indian team. Mankad had turned the tables around for his country. The triumph over England was followed by India outclassing the likes of Pakistan and New Zealand and finally being able to draw against the giants West Indians in the Tests.

The testimony to Mankad’s greatness

India toured England in 1952 for a four-Test series. There were no surprises when the visitors were thrashed 0-3, considering how dominant the England team was in their backyard. However, Mankad retrieved India’s pride with a terrific all-round performance on the English soils. He left a significant mark at the Lord’s, which no Indian so far has able to repeat it. Mankad, who missed the opening Test at Leeds due to his commitments to his Lancashire League club, Haslingden, made his first appearance in the series in the second Test at Lord’s.

In Tests that India won when Vinoo Mankad played, he averaged 100 plus with the bat, and eight wickets per Test at 13 runs apiece.

Mankad top-scored in the first innings with 72 runs, while the other players threw away their wickets cheaply. The Indian were bowled out for 235 in 94.3 overs. During England’s first innings, Mankad bowled 73 overs and picked five wickets at an economy of 2.68. Meanwhile, India were 302 runs behind when they walked out to bat for the second time in the Test. After a good show with the ball, Mankad struck with the bat. He batted for 270 minutes and piled up 184 runs before he was dismissed. His knock was inclusive of 19 boundaries and a six.

Unfortunately, even a brilliant all-round performance from Mankad could not save the Test for India and England went on to seal the match by eight wickets. However, Mankad’s 5 wickets and 184 runs were surely ranked as one of the greatest performances from a player of a losing side. Mankad was the first player in more than 30 years to score a 100 and take five wickets in the same Test and the first Indian to achieve this feat. The Lord’s became more memorable for India when Mankad’s name found a place at Lord’s both batting and bowling honour boards.

Sixty-five years have passed since that moment; no other Indian player has managed to do so. Mankad still remains one of the three non-England ‘away’ players whose names appear on both batting and bowling honours boards at Lords.

The team-man, Mankad, was the captain’s go-to player. He went to bat with a huge smile on his face whenever he was asked to go; at any position. He still remains among the three cricketers to have batted at any position in Tests. His concentration and resistance was his strengths that built him as an excellent batsman. He watched the ball well; waited it to come and then planned his shot. This quality of his allowed him to bat for longer hours and in order frustrate the opponents. In 1956, India hosted New Zealand for a five-Test series. 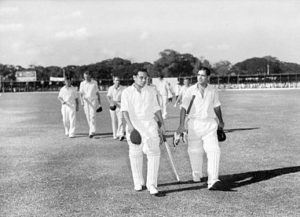 Indian openers Pankaj Roy and Mankad set Corporation Stadium, Madras, on fire as the two went on to bat for over eight hours and set up a record stand of 313 runs for the first wicket. The two held the record for the next 52 years before Neil McKenzie and Graeme Smith broke the record with a 415-run partnership for the opening wicket in 2008.

According to the laws of cricket, the non-striker must keep within his ground until the ball has been delivered. During India’s tour of Australia 1947/48, Mankad had warned Australian opener Bill Brown a number of times for backing up too far at the non-striker’s end. When Brown continued to take the wrong advantage by crossing the crease even before the delivery was bowled, Mankad ran him out. The umpire had given Brown out leading to infuriating the Australian cricketers and media. Although the laws of cricket prove the dismissal legal, there were several questions raised against Mankad’s sportsmanship. Now, running out a player in this fashion is referred as ‘Mankading.’

Vinoo did the Mankading after enduring vilest racial abuse, and having warned the English batsmen about backing by up. Pity the term endures https://t.co/z4ly3hhMhT

Mankad, who served India for 44 Tests, scored 2,109 runs at an average of 31.47 and had five Test tons and six fifties to his name. Although these numbers do not highlight his real potential, one must remember he was among the three batsmen to have batted at any position in Tests. A player needs tremendous talent to do so. Meanwhile, in 44 Tests, he grabbed 162 wickets, that included 2 10-for, eight 5-for and ten 4-for hauls.

Today is the 100th birth anniversary of Vinoo Mankad, the first great Indian all-rounder. He was a truly magnificent cricketer.