There is a saying – The timing was just perfect, everything fell into place. If Gautam Gambhir ends up into the cut off list of the Indian team for the upcoming ICC Champions Trophy 2017, his story will be nothing but a fairytale. Although a player’s performance in a T20 tournament cannot make a final judgment for a 50-over contest, the Indian Premier League (IPL) is highly considered a superb platform for a cricketer to make an international comeback. When the ICC event is less than a month away, the regular faces of the Indian squad – Virat Kohli, Ajinkya Rahane and Rohit Sharma – are not in the best of forms and contradicting to that, Gambhir has been unstoppable in the ongoing edition of the IPL.

“Gambhir has so far been the most consistent Indian opener in this IPL. His batting is still smooth and layered and whenever his bat makes a contact with the ball, there is a run. It’s another matter he could’ve just played as captain and still be worth his weight in gold,” former Indian captain Ravi Shastri wrote in his column in Times of India.

The Kolkata Knight Riders (KKR) captain has scored four half-centuries in the 10 matches he has played so far in the IPL 2017. During KKR’s previous match against Sunrisers Hyderabad, Gambhir had an off day at work for the first time in three innings. His early dismissal and a century from David Warner led to the latter bagged the Orange Cap. Even though Warner has the most number of runs so far in the tournament, no player has hit as many boundaries as Gambhir. From 10 matches, Gambhir has recorded 52 fours, while Warner has 47 fours from 11 matches. While Gambhir has been competing against the Australian for the Orange Cap, his real battle is against his own countrymen, keeping the Champions Trophy in mind.

Gautam Gambhir at his usual best in IPL..

KKR now tops the points table with this win..

Gambhir, who last played in the blue jersey in 2013, must outclass Rohit Sharma and Ajinkya Rahane in order to get the selectors’ attention. Out of 10 matches, Rohit has six scores in the single digits and in all the occasions, Rohit did not open Mumbai Indians’ innings. India’s other regular opening batsman, Rahane, also has had a poor touch in IPL 2017. After an excellent start in the tournament with a score of 60, his momentum took a dip and has not scored a fifty in the last nine matches he has played.

Regardless of these below par numbers beside the names of Rohit and Rahane, they will certainly be India’s first choice for openers. All Gambhir can do is bag the reserved opening batsman’s place in the 15-man squad. India have already crossed the deadline to submit ICC their Champions Trophy squad so Gambhir still has some more time to make his presence felt stronger by piling up as many runs as possible. There have been several predictions circling around the internet about the expected Indian squad, where Shikhar Dhawan has been given more importance for the reserved opener’s spot.

However, Gambhir who brings along tremendous experience along seems more feasible for the position. In the recent Test series against New Zealand, Gambhir was recalled in the Indian Test side after a gap of more than two years. He was chosen ahead of out of form, Dhawan, and that showed selectors’ still have faith in the 35-year-old. During the New Zealand Test series, Gambhir had injured his shoulder during the second innings and was forced to be sent off retired hurt. However, the senior player came back the next day and scored a gritty half-century. That spoke volumes about his intent, character, and commitment to his team.

India sure has produced positive results in the last few months; they have won limited-overs series against the likes of New Zealand and England with these young lads at the top, but you cannot avoid the fact that the ‘experience’ factor plays a huge role in crunch situations in the ICC tournaments. India’s loss against Australia in the ICC Cricket World Cup 2015 is an example of why India need a senior player in the top-order. Dhawan and Rohit succumbed to the pressure despite giving India a great start. While Gambhir’s 97 in the 2011 World Cup final can never be forgotten, that played a massive role in India’s historic victory.

Moreover, ever since Kohli took over the full-time captaincy from Dhoni in the limited-overs, India’s has played only a handful of matches. Prior to an event as huge as Champions Trophy, Kohli’s experience as India’s ODI captain is inadequate for India to defend the trophy. He, of course, will have Dhoni by his side, provided Dhoni gets a green signal for the event; Gambhir’s presence in the dressing room will only strengthen the Indian side. 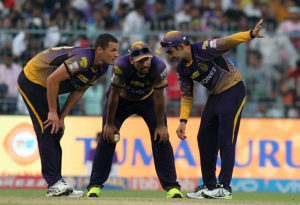 Along with scoring runs in the bundle, Gambhir’s captaincy has been top notch. Cricketer-turned-commentator Aakash Chopra has termed KKR’s performance “clinical” and one of his tweets highlighted why Gambhir has been a stand-out. In one of the group matches between KKR and Rising Pune Supergiants, Gambhir had a slip, leg slip and a silly point when MS Dhoni was on the strike. That testified Gambhir’s aggressive captaincy and that has surely worked in the favour of KKR.

KL Rahul’s injury has ended his hopes of making it to the Champions Trophy. Rohit Sharma has not opened an innings in the IPL. Rahane has struggled to find form. Making a switch between formats in cricket is tough anyway. It gets hard when an out-of-form batsman has to do that. There comes Gambhir’s inclusion. He has not put a foot wrong in the IPL 2017; he has made his intentions clear, he wants an Indian berth for the Champions Trophy.

Considering Gambhir’s current touch with the bat and impressive captaincy that has kept KKR top of all the teams, he will only toughen Virat Kohli’s Indian side if they participate in the Champions Trophy 2017.