Despite a tough group, hopes are high that India’s U17 footballers can exceed expectations on home soil at the upcoming World Cup

Pusarla Venkata Sindhu had a special meeting with the Indian U17 boys in Mumbai following the draw for the FIFA World Cup last week. She told them not to worry about the opponents, but to concentrate only on what’s in hand – their own performance.

The silver medallist badminton player at the 2016 Rio Olympics shared her experience to inspire the U17 footballers, who are going on to participate in their most cherished dream of playing in a World Cup. They felt truly motivated to listen to the world-ranked number five player from India.

The young Indian footballers need to experience more inspiring stories before they begin their first match against the USA on October 6 in New Delhi, since host nation India have been drawn in a tough group, along with Colombia and Ghana at the FIFA U17 World Cup. 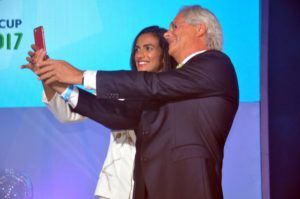 Two top-teams from each group will automatically qualify for the second round while four of the best third-placed teams from the six groups will form the 16 teams for the second round. Luis Norton de Matos, the Portuguese coach in-charge of the Indian U17 team, felt that the magic total could be ‘three’ to move out of the group stages.

“One win can do it, I sincerely believe that”, said Matos. Only eight teams will be eliminated after the group phase and Matos was of the opinion that India has an outside chance of progressing.

“Ghana and Mali are probably the best two teams from Africa while Colombia is one of the leading football-nations in South America. The USA have participated in each edition of the U17 World Cup bar one. It’s a tough group. But my boys are not afraid of anyone,” said the Portuguese manager.

That was evident when Jackson Singh, a footballer from the Indian U17 team, declared that “we are ready to face the world and keen to make history.” Another footballer, Sanjeev Stalin, the left full-back, declared, “cannot wait for the World Cup and the first match to start!”

Sunil Chhetri, the captain of the Indian senior team was on stage helping with the draw. The fourth highest goal-scorer for the national team among current footballers of the world and the first one to be featured in the cover of the AFC magazine was impressed by the confidence shown by the footballers.

“They did not even discuss their opponents! They were only concerned about themselves and I must say all of them are really eager to be on the field. That is the most important thing I had noticed among these boys,” remarked Sunil. 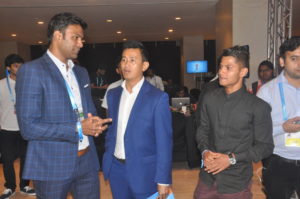 After the Portuguese coach Matos took charge in March 2017, the Indian U17 team visited a few European nations to play friendly matches. They performed well, earning a few victories. Under Matos, the boys are happy, which, according to the president of the All India Football Federation, Praful Patel, is the most significant change he has witnessed, just three months before the World Cup.

Both advised the young players to have fun and enjoy the game. Kanu went a little further saying, “on the field, play like there is no tomorrow and in practice, leave nothing for tomorrow.”

Cambiasso discussed the pressure of playing the World Cup on home soil, in front of the home crowd.

The group is difficult for the debutant India. But it is always going to be difficult in a World Cup.

Come October, India will definitely be ready to embrace these young footballers. And if they manage to win even one match, the Diwali, one of India’s most celebrated festival of lights, is going to be more special, without any doubt.

On the European Super League

I know before the game what will happen if we win...

CricketSoccer Desk - April 17, 2021
0
It is time for the final of Copa del Rey and Barcelona would not let this trophy slip. The Champions League campaign had been a frustrating story and even though the title race in La Liga is hanging on a tight rope, but, overall, the season has been a tough ride for Ronald Koeman and Barca.

What I have now with Ole is different; he wouldn’t go...

Zinedine Zidane tames Liverpool at their own backyard