No matter the city, the attractions, the allure, football will always come first for some people in this tale of two football-mad Liverpool fans in Amsterdam

The cabins of the Red Light District never fail to generate that bit of infectious interest in even the most reticent of tourists. The twinkle in the eye and the spontaneous chuckle, mingling fasciation for the bizarre that lies in the grey area between pleasure and sin — that tells a tour guide that he is hitting home in the right areas.

However, once we moved into the historic Plantage quarters of the Jewish district, with its many many curious stories, there seemed to be a developing sense of urgency in my four clients, especially the two men. Surreptitious glances at the watch in front of Rembrandt’s House, whispered anxiety as we biked towards the Hollandsche Schouwburg and that sort of thing.

Standing in front of the building where Nazis had herded and transported the local Jewish populace to the concentration camps, the two men listened gravely as I narrated that 104,500 of the Dutch Jewish community had died during the course of the War. And then there was a hesitant cough as one of them, the chap named Mike, spoke.

“You said you are a sportswriter…”

“Yes, I am. Guided tours are something I do on the side.”

“What sports do you cover?”

“Ah …” he sighed with a morose expression.

There was yet another glance at his wristwatch. His friend Bert, the taller of the two, cleared his throat.

“Say, do you write about football?”

A question I am asked quite often, especially in the cricket-agnostic expanses of the continent. “Well, sometimes I produce cartoons on the game with my partner. But that is about it.”

“Ah …” he echoed the previous morose expression of his mate.

Yet, a determined tour guide does not allow himself to be swayed by such interruptions. I continued,  “If you look towards the opposite side of the street, you’ll see the Holocaust Museum. The Schouwburg and the Museum together serve as a reminder of what human beings are often capable of.”

The two elegant ladies nodded with appropriately sombre expressions, while their husbands looked positively wretched. Had the distant history of anti-semitism moved them so much?

I tried to elevate the mood by biking along a long way. Nieuwe Kerkstraat and then Weesperstraat, a five-minute ride to clear the head, and then we were in front of the famous statue of the Amsterdam Dockworker.

There are always impressed nods when I say this. But on this day there were further furtive whispers between the two men and their wives. And then Samantha, Bert’s strikingly pretty wife, firmly intervened, “Why don’t you just ask him?”

Whatever they were supposed to ask was perhaps not very easy to pitch forward. Bert hesitated, looking embarrassed.

“Infirm of purpose, give me the question,” that seemed to be Samantha’s way of dealing with things. She looked at me.

“How far are we through with the tour?”

“Halfway. Another hour and a half to go.”

There were a couple of audible winces. Was I doing that bad a job? But my bike tours had been rated 5-star by almost everyone.

Samantha’s next question was tangential. “You know about football?”

I was piqued. “I live in Holland. What do you think?”

“You know of Liverpool and Manchester United?”

“You know they are playing at Anfield today?”

“Oh, are they? North-West derby and all that.”

“Exactly. And as much as Debbie and I would like to continue on this tour, the two husbands of ours would do in Amsterdam as they would have done back home at Birkenhead. So, the kick-off is in five minutes and they want to watch the game. Is there a way that can be done without interfering too much with your schedule.”

This was a poser.

Each of these great landmarks invoked in Bert and Mike the most painful of groans. The course in front of me was easy enough to decide.

“You do realise that I cannot take all five bikes back to the bike rental alone.”

“90 minutes plus the halftime, right?”

There were hints of a smile starting to grow around the corners of the grave faces. At last this stubborn Amsterdam tour guide was speaking their language.

“Tell you what … There is an English pub in Rembrandtplein. We can bike there in a couple of minutes. And then we can sit with some drinks … and enjoy the game?” 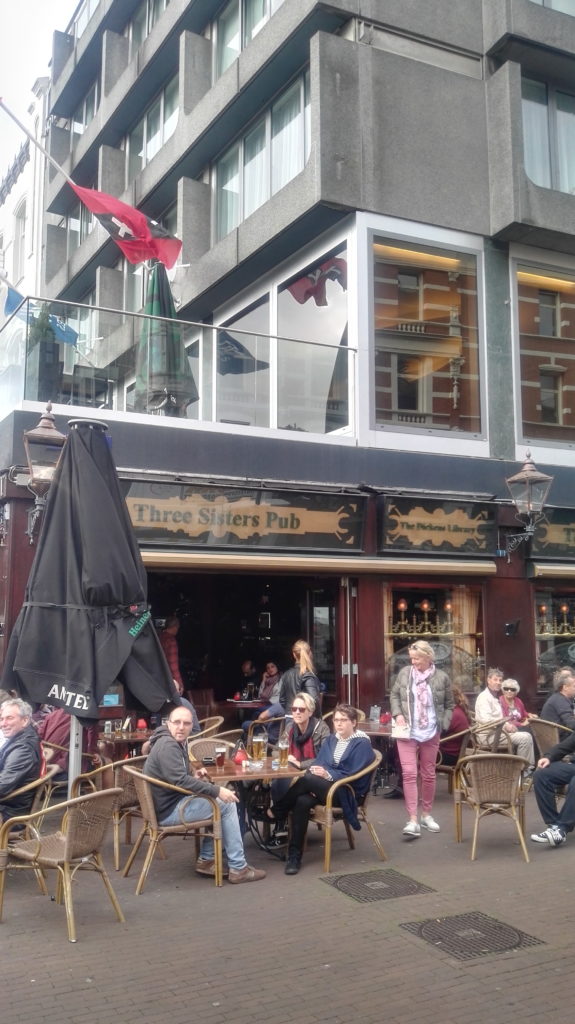 There were delighted smiles. The radiance so brilliant that even touched the ladies.

“But we have to go and return the bikes after that. And we have to forego the rest of the tour.” I had to underline that.

Bert and Mike hastened to reassure me.

“Of course, we will pay the full amount … and you enjoy the game and have some drinks.”

“We will do this some other day …”

“We have to watch this match you see … Gomez is playing instead of Alexander-Arnold, and if that Anthony Martial gets past him …”

The level-headed Samantha stepped in with the important details. “Of course, we will compensate you extra for not being able to complete the tour.”

We were already on our bikes again, the heroic deeds of the Amsterdam Dockworker forgotten in the pages of history.

“So, you will compensate me extra for not showing you Blauwbrug, Flowermarket, Begijnhof, Tower Bridge, Homomonument and the Anne Frank House?” I asked, just to be sure.

Samantha sighed. “Yes, that’s what we have to do for football.”

Amsterdam never fails to impress, to intrigue, to intoxicate. There are tourists from all over the world who have glimpsed its highlights and hidden gems as I have shown them around and parted wonderstruck.

But never have the smiles been wider, or the expressions more satisfied, than those etched on the faces of Bert and Mike. They were in this magical city of charm, allure and sin, of canals, of gables, of cabins and of marijuana, of bikes and of boats; and they sat in the English pub, drinking their beer, having the time of their lives as Liverpool and Manchester United played through a goalless draw.

The most satisfied of customers.