Emeka Ezeugo is the biggest fantasy story that has happened to Indian football until now. He started his football career in India, playing in university games and went on to play in the senior World Cup in 1994 in the USA for Nigeria.

Currently based in the US and over an interview through Facebook messenger Ezeugo blasted the officials of Nigeria Football Federation as well as FIFA and the AIFF for what he feels are their wrong-doings.

Q: Being the host country of the U17 World Cup, how this can help Indian football prosper?

Emeka Ezeugo: It’s really shameful that the stakeholders of Indian football failed to recognize what an immense opportunity the U17 World Cup has presented to football-loving Indians. The World Cup was the best thing that could have happened to Indian football but the enemies of football took charge and did all the destructive job.

Q: What makes you say so?

EE: Football should have been taken to the streets and hinterlands of India before the World Cup started but the enemies of football – the administrators – had other plans. Futile plans to sabotage the growth and advancement of the beautiful game. This World Cup was the greatest tool to propel football to the summit of sports in India. The Current U-17 World Cup is a failure already, nothing different from the Commonwealth games of 2010 that India hosted. What was the benefit of the Commonwealth games to India? You will figure out at the end of this youth global event what a futile exercise this has been. 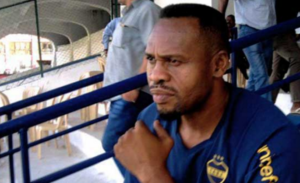 Q: Can you explain the areas where they went wrong?

EE: FIFA, Adidas, Mission XI and AIFF brought Puyol, Desailly, Kanu, Amunike, Lucio, etc to promote football in India and I ask, are these people out of their minds? Which young adolescent in Shimla, Kashmir, Phagwara, Ludhiana, Darjeeling, Manipur etc. can relate to the story of these great footballers?

Can a twelve-year-old Indian realistically aspire to reach the height these players attained? Emeka Ezeugo played in local tournaments across India, won the All India University Championship with Punjab University, represented India in the World University games and from top Indian football teams, he went on to represent Nigeria in the Olympic Games and the World Cup. Here’s an attainable story that would resonate across the board with every Indian youngster.

Q: Nigeria, the champions of the last two U17 World Cups, could not qualify because of age fraud. Your take on that…

Corruption and incompetent administrators have been the bane of Nigerian football. Wrong people who have no business being the custodians of the game are calling the shots in Nigerian football. Nigeria didn’t qualify for the U17 World Cup because of the corrupt officials in charge. They refused to pay the players’ allowances for several months and the players went on strike and refused to train. On the day of the match they brought a paltry amount to pacify them but the motivation wasn’t there anymore and they lost at home to a team they had beaten away. 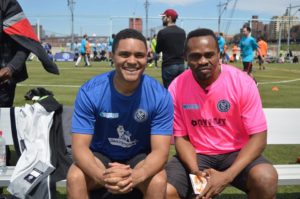 Q: How could the Nigerian football federation find an apt solution? What they should do to fight with it?

EE: Age cheating is the product of corruption. There’s quick money to be made by these corrupt administrators who dabble in player representation. It’s a long story. Sadly when FIFA investigates, they rely on the crooks who they collaborate with. Age cheating is a malignant cancer in football but FIFA nurtures it when they run to the corrupt officials of the Nigeria Football Federation to combat the cankerworm.

CricketSoccer Desk - May 20, 2022
0
Dominic Calvert-Lewin scored five minutes from time to guarantee Everton's Premier League survival as they rallied from two goals down to secure a thrilling 3-2 victory over Crystal Palace at a rocking Goodison Park on Thursday.