CLR James and Neville Cardus would tell us in their whimsical, wishful and fanatical terms that cricket unequivocally mirrors the world.

Men like Derek Birley and Mike Marqusee would argue the same within bounds of reason, less vehemently, with more pragmatism and way more scholarly depth.

Cricket is definitely a microcosm of the world as a whole, more precisely of the commonwealth. And my contention here is that while it may or may not accurately reflect the state of the world, we can indeed glimpse the journey of mankind as captured in the shaving mirror …  if we do trace the history of the noble game with sufficient detail.

The early days of cricket threw up an incredible quantity of facial hair, sprouting luxuriant and lavish, manfully and without apologetic trimmings.

Standing like a colossus, violently rocking the game in its early cradle was WG Grace himself, the most famous beard between Karl Marx and Bernard Shaw. And that was also the way of the world, during the simultaneous Golden Ages of cricket and facial fungus.

Yet, this being a Movember effort during The Ashes, we will sideline the beards, and ignore worthy men like Grace, Bonnor, Barlow and Blackham. We will look at the most famous moustaches that sprouted and stood alone in the early history of The Ashes. And we will stop at World War One, after which the outgrowths on the upper lip mysteriously diminished in size and frequency.

Alongside we will also cover some of the bona fide greats who were brave enough to emerge on the field clean shaven in such hair-raising times. 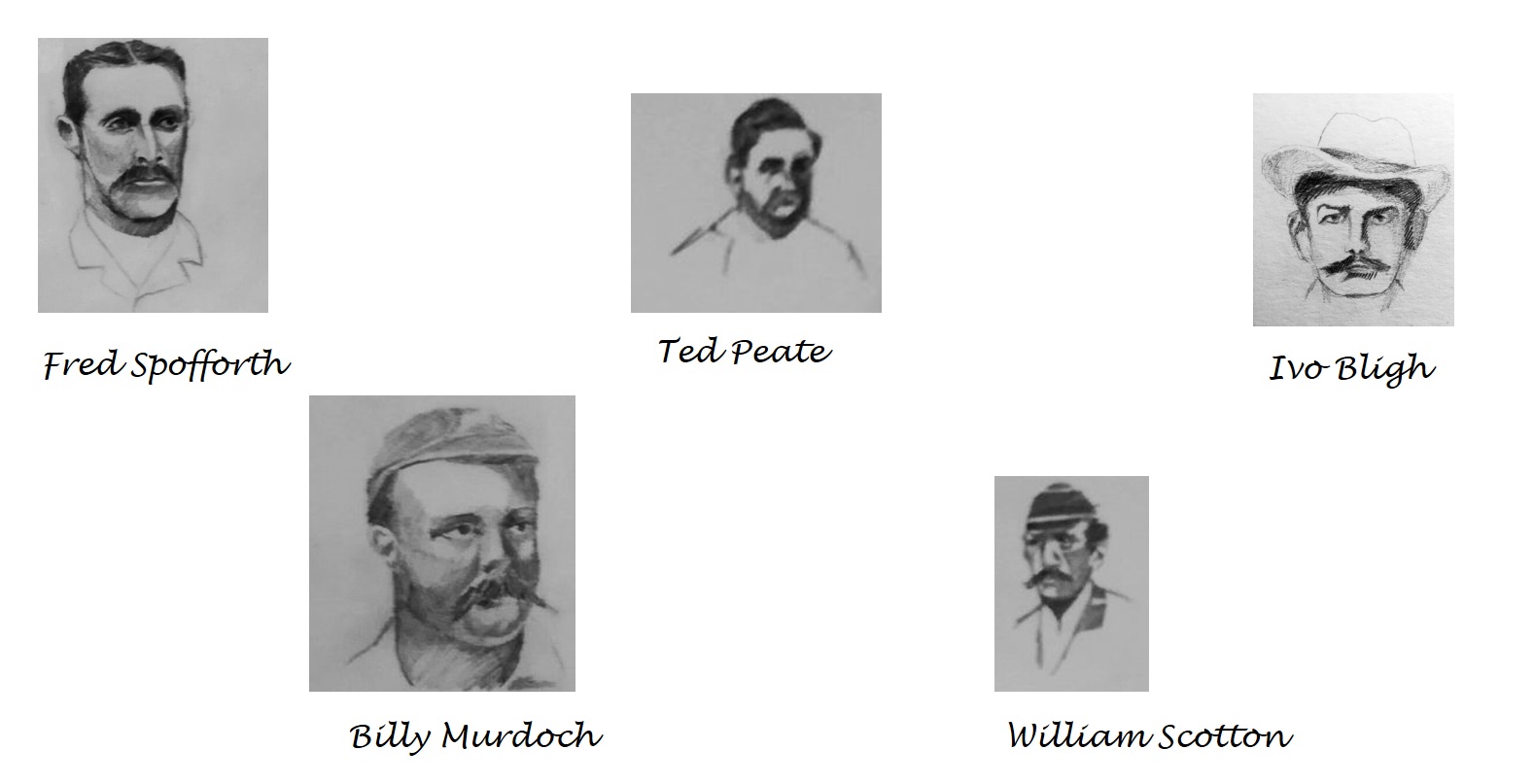 Fred Spofforth — The Demon bowler was not given the devilish epithet just for his diabolical tricks with the leather. If WG, with his flowing beard and furious countenance, resembled the unmerciful God of the Old Testament, the hooked nose, the piercing eyes, the lithe body and the magnificent, slightly drooping moustache gave Spofforth all the mesmerising aura of The Devil. It was often claimed that he could get batsmen out by the sheer power of hypnotism, where his moustachioed menace played a major role.

Billy Murdoch — The captain of the early Australian sides was not only a close friend of WG’s, his spreading girth, and the eminent growth spreading across his chubby cheeks allowed him to match the imposing physical traits of the English Leviathan. Just like WG’s giant frame and beard did nothing to hide that he was just an overgrown schoolboy, there remains something extremely innocent and lovable in Murdoch’s build and way the outgrowth spreads across his face.

Ted Peate — A left-arm spinner of the first order, Peate was rendered morose after Harry Boyle hit his stumps to complete the Birth of The Ashes Test. Some of the sadness is reflected in the limp droop of the moustache. It also tells us that there was bubbly humour always on the verge of sneaking out from underneath the curvy formation. Else, at that juncture, how could someone have said, “I couldn’t trust Maister Stood.”

William Scotton — A stonewaller who could drive the most amiable of cricket fans into frustrated hair-tearing frenzies, the secret of Scotton’s resolve is not difficult to deduce when one looks at the barricade across his upper lip. No wonder he could get under the skins of spectators in both countries, scoring 90 in 340 minutes at The Oval and following it up with 82 in 345 at Adelaide. That was not all. In his penultimate series, he added 170 with WG once again at The Oval, his own contribution 34 in 225 minutes.

Ivo Bligh — The hero of the most romantic love story of cricket, Bligh was the one presented with the urn by a group of Melbourne ladies. It rested on his mantlepiece for years before becoming part of the MCC Museum. Bligh, the second son of 6th Earl of Darnley, Bligh succeeded his brother Edward to the title when the latter passed away in 1900. The excellent moustache provided just the gravitas required for this late inclusion in the Debrett’s.

Tom Horan — It is a handful to be a top-class cricketer as well as one of the most important early chroniclers of the game. But Horan was good enough to perform both the roles with distinction, playing 15 Tests and writing under the pseudonym Felix. His massive moustache, with the additional weight of stately sideburns, did support his endeavours to the full.

George Ulyett — Perhaps the first great all-rounder in Test cricket, this fantastic Yorkshireman was good enough to open both the batting and the bowling for England. He did much more, including drawing his knife to defend himself when a shark appeared in the vicinity as he splashed about in the water. The confidence for this versatility obviously had a lot to do in the grandiose manner the thick moustache displayed itself prominently on his face.

Drewy Stoddart — He led England in cricket and rugby and represented the country in Australian Rules Football as well. The first captain to declare a Test innings, Stoddy is arguably the greatest all-round sportsman produced by England. The curvy, rich growth on his upper lip, however, cannot camouflage the sensitive soul that lay inside this remarkable athlete.

George Lohmann — With 112 scalps at 10.75, Lohmann still boasts the best bowling average among men who captured more than 15 wickets. Had his constitution not been so frail, he could perhaps have risen to even greater heights. This most handsome of men was remarkable with the blonde moustache that curled softly under his rounded nose.

Archie MacLaren — Brilliant, boorish and bankrupt, MacLaren was a grand sight when in full flow. He led England in 22 of the 35 Tests he played in, often controversial, often querulous, sometimes successful. MacLaren’s moustache reflects the man well, conveying both chutzpah and a bit of bristle, plenty of pomp and more than a hint of churlishness. 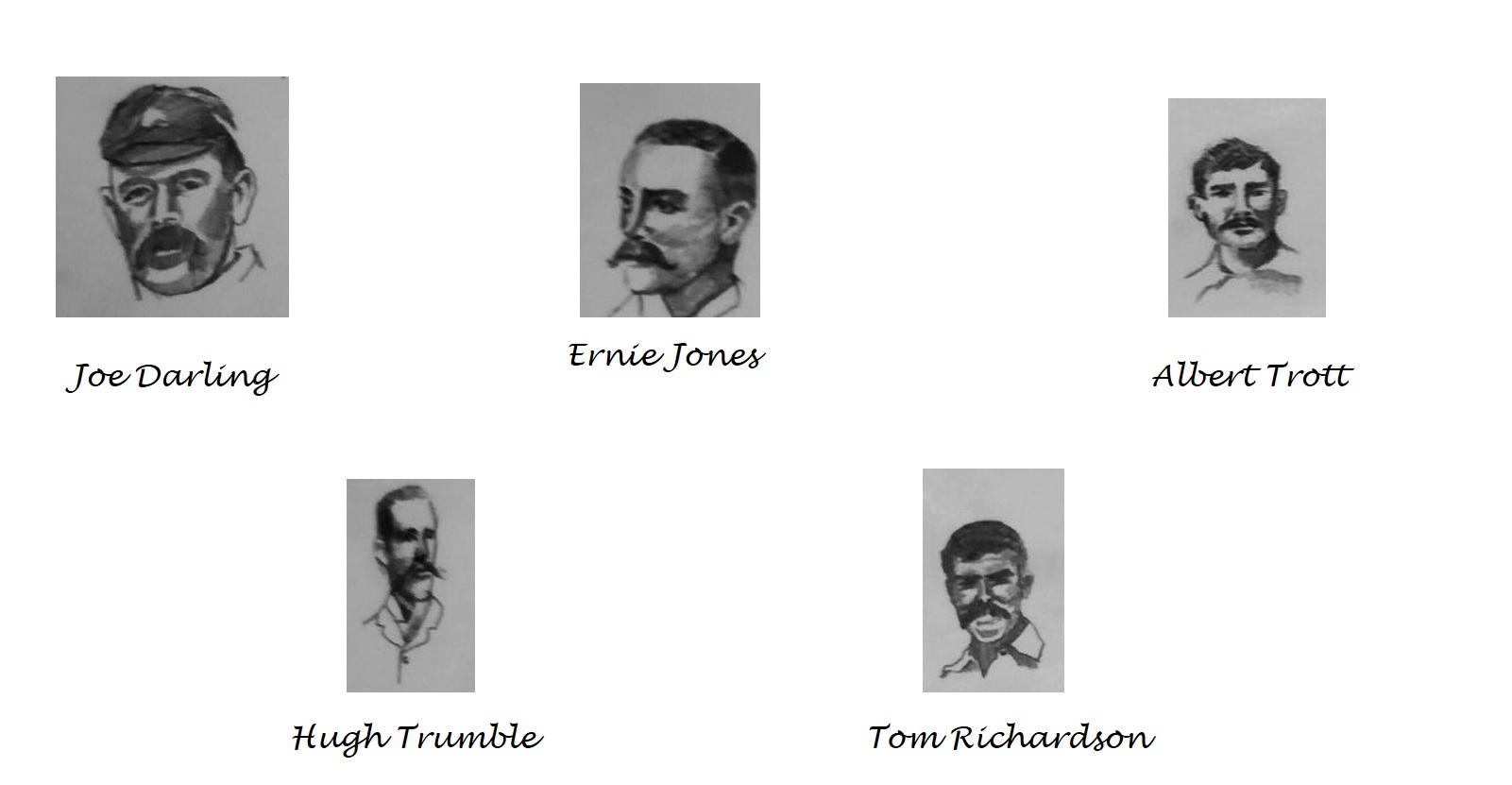 Joe Darling — A superb left-handed batsman, Darling was also one of the canniest captains of his day, whose bowling changes were inspired and whose slightly questionable tinkering with field positions effectively ended the Test career of KS Ranjitsinhji. Darling’s astuteness and authority are both evident in the way the moustache is set resolutely on his face.

Hugh Trumble — The first great off-spinner in cricket had an incredible arm-span, and the length of his moustache, especially when waxed, seemed to run that close. Trumble bowled untiringly, and was more than a decent batsman, and proves to be a genuine all-rounder when we note how delicately he nurtured the outgrowth on his upper lip.

Ernie Jones — The fast bowler who sent a lightning fastball through the beard of WG was also the owner of one of the most commanding S-shaped moustaches. It was perhaps the confidence that this possession generated that allowed him to apologise to Grace with the words ‘Sorry Doc, she slipped.’ When the Prince of Wales asked him whether he had attended St Peter’s School in Adelaide, Jones replied, “Yes, Sir. I take the dust-cart there each Monday.”

Tom Richardson — The curly black haired fast bowler with gipsy blood and an enormous heart also had one of the most splendid moustaches of the day. He could bowl fast tirelessly, over after over, his big feet steaming in again and again, and one wonders if all that could have been achieved without that thing on his face.

Albert Trott — The man with a supreme debut series for Australia, curiously ignored by his country after that, and one who, in retaliation, sent Monty Noble’s delivery over the pavilion of Lord’s. Trott was largely acknowledged to be the greatest all-rounder of his day and had a moustache to match that stature. 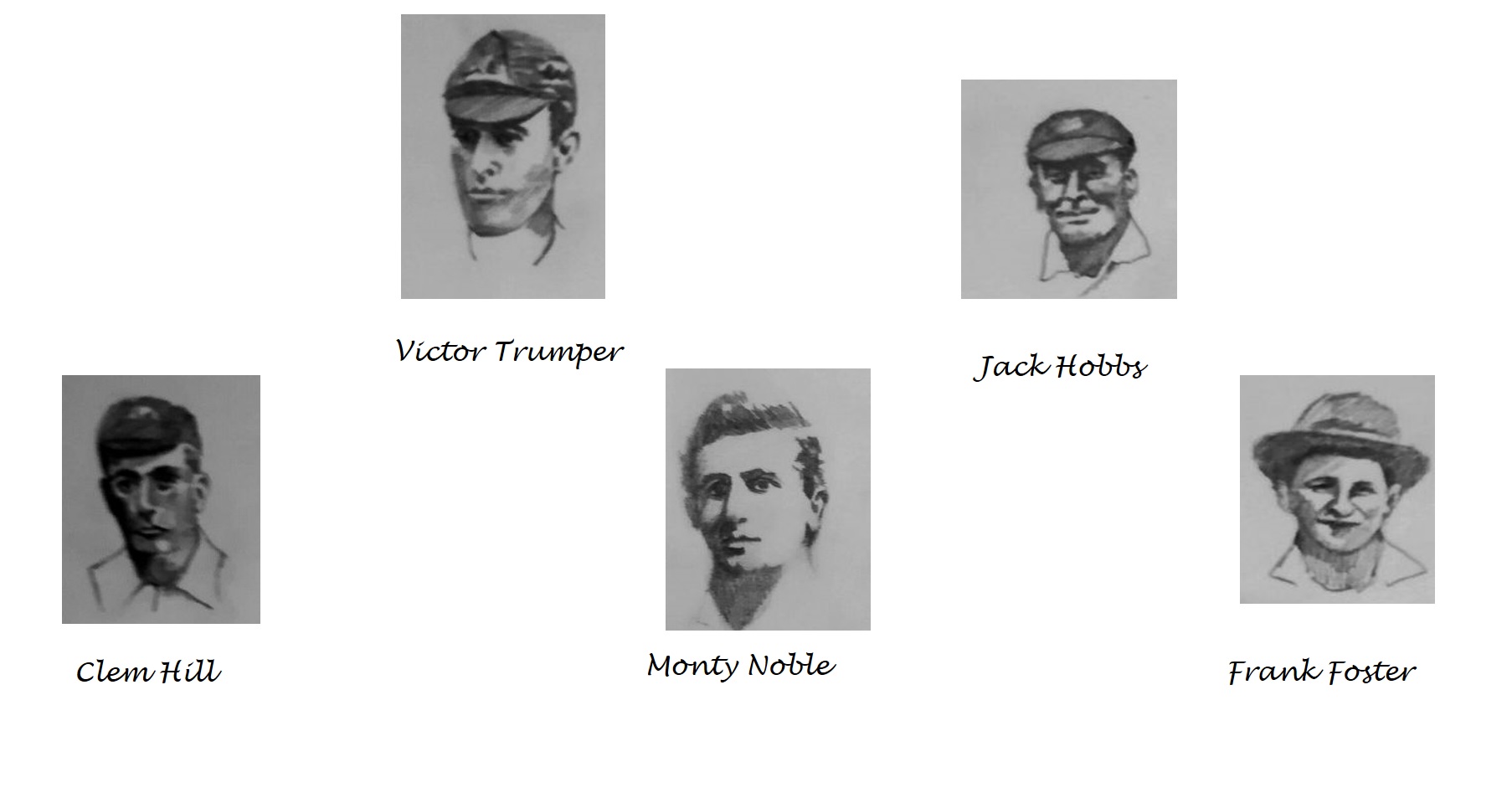 In the spirit of inclusion and unbiasedness, we will now dwell on some of the giant names of the pre-World-War-One era who walked into the cricket grounds in such hirsute times without a strand of growth on their upper lips.

Victor Trumper — Given that his flashing blade redefined aesthetics of batting, it is perhaps little surprise that Trumper allowed another variety of flashing blades work on his cheeks, chin and upper lip. No wonder a young Arthur Mailey woke up in cold sweat on the morning he was supposed to come across his hero on the cricket field, wondering about the disaster that would ensue if Trumper cut himself shaving.

Clem Hill — The first Test cricketer to be born after the birth of Test cricket, Hill ended with a record as good as Trumper’s, even better if we consider tough opponents. A pugnacious southpaw, he was also not averse to throwing a physical punch or two at dim-witted selectors. However, even without any facial hair, Hill was nicknamed ‘Kruger’ because of his supposed resemblance to Paul Kruger, the bearded president of the Boer Republic.

Monty Noble — A great all-rounder and a great captain, Noble was a dentist by profession and well versed in handling sharp objects that hovered in and around the face. Perhaps it should come as no surprise that he was clean-shaven. Later he penned brilliant books on cricket, where he discussed the game with the same surgical precision that characterised his dentistry, batting, bowling and shaving.

Jack Hobbs — This greatest of opening batsmen was perhaps the one cricketer who most significantly carried the game from the pre-Great-War days into the 1920s. Given this, it perhaps makes sense that this Surrey and England master never sported an outgrowth of his amiable features. When in the 1920s Hobbs and Herbert Sutcliffe opened the England innings and Warren Bardsley and Herbie Collins did the same for Australia, Test matches witnessed the till-then rare, if not unique, a sight of a complete set of four clean-shaven opening batsmen.

Frank Foster — A brilliant all-rounder, maverick and mercurial captain of Championship winning Warwickshire, and an Ashes-winning hero who cut the ball back to hit batsmen painfully in the inside of the thigh, Foster was nonchalantly clean shaven before growing a dignified moustache long after his playing days. It was this man’s experience in bowling leg-theory that Douglas Jardine consulted before while up with his Bodyline idea. Foster could take wickets by the bushel and score fast double hundreds, while also having enough time left over for a well-groomed shave.

And then there were (almost) none

As already mentioned, after World War One the facial fungus on the upper lip mysteriously diminished in size and frequency.

One statistic will clarify the extent of this sudden disappearance.

Before Graham Gooch changed this hairy (or hairless) trend with his Zapata moustache in 1990, there was not a strand of moustache on the upper lip among all the Test triple centurions put together. Even Garry Sobers, who did wear a nifty trim in his later years, was immaculately clean shaven during his 365 not out.

It took the Ugly Australians of the 1970s, with the Chappells, Marshes, Lillees and Max Walkers, to bring hirsuteness back under the cricketing hats, before leaving the unused Gilette in the excellent hands of David Boon and Merv Hughes.

But, to delve deep into hair-splitting analysis of a wealth of magnificent moustaches, there is no other option than to look at the Pre-World-War-One era. 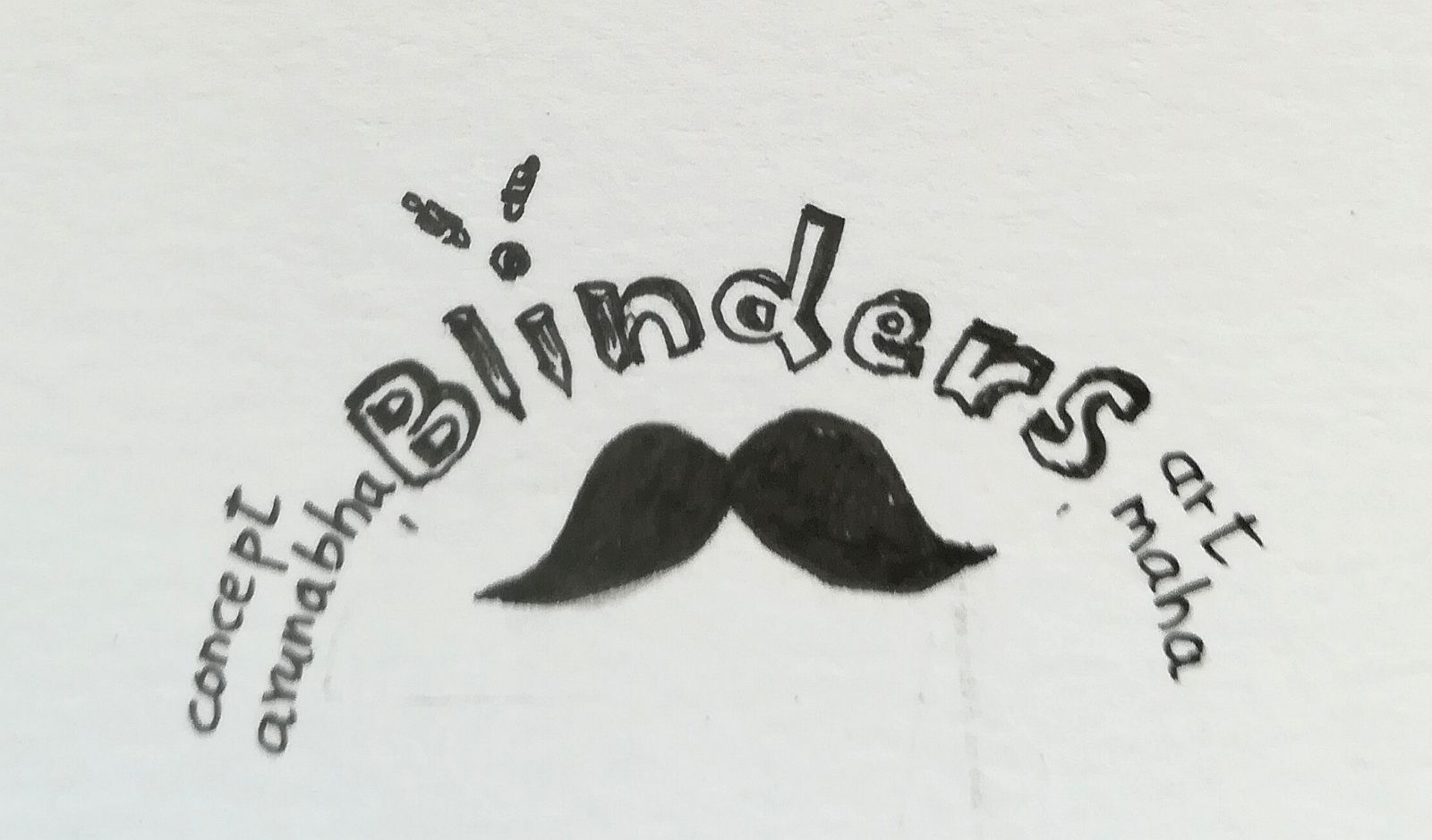 (A Blinders article. Text by Arunabha, Sketches by Maha)

Faisal Caesar - May 5, 2021
0
PSG lost their calm and composure because they were tactically out-thought and outclassed by a much-more superior brain, who knows how things can be done in a smarter way.

Doubts over Mbappe, but Neymar is there

Jayawickrama and Mendis impress, Bangladesh defeat is not surprising

Glory for Inter and the journey was not easy