Ravichandran Ashwin made a revelation last week that he would try leg-spin in the upcoming Indian Premier League.

“Leg spin is part of my plan going into the IPL. I am just trying to build my armoury. I used to bowl good legbreaks with my offspin action when I was playing league cricket in Chennai. Over a period of time, in a search to get my stock ball right, I obviously had to cut out a lot of those things. I had possessed a lot more variations. Having bowled offbreak as the stock ball for almost 10 years, trying to change things around is challenging. But I don’t really settle for anything. At no point in my career have I thought ‘this is it’ and decided to settle for the rest of my career,” Ashwin recently said, as revealed by ESPNCricinfo.

Now, for someone with 311 Tests wickets in 57 matches to try something completely different from what he is might seem so imbecilic. But such has been the impact that wrist spinners have been creating in World cricket that Ashwin’s decision to strengthen his armoury with the most sought-after skill in cricket is actually sensible.

The average price of a capped Indian wrist spinner in the IPL auctions last month was a whopping 5 crore further underlining the immense promise that they hold in limited-overs cricket at the moment.

To put things into perspective, even more, it is worth analysing the sheer number of wickets wrist spinners have taken since the Champions Trophy in June last year.

There are three wrist spinners – Yuzvendra Chahal, Kuldeep Yadav and Adil Rashid – in the top ten wicket-takers since the Champions Trophy in One Dayers. Akila Dananjaya is one namesake off-spinner in this list although he relies more on his leg break and googly to get wickets rather than conventional finger spin. Dananjaya can be put into the class of mystery spinners rather than a finger spinner which means the finger spinner with most wickets in the past seven months is Mitchell Santner with 12 wickets in 9 matches.

Dig deeper and you see that teams rarely field finger spinners these days in limited-overs cricket. The only handful that still gets consistent games are Santner, Shakib-al-Hasan, Moeen Ali and Mohammad Nabi.

There are few others like Axar Patel, Imad Wasim, Mehedi Hasan, Ashton Agar and Ashley Nurse who make sporadic appearances.

On the other hand, wrist spinners are invaluable and all major teams have one of them in their side.

So where have the offies vanished? India had Ravichandran Ashwin and Ravindra Jadeja but their rather poor returns meant that Chahal and Kuldeep replaced them and made an instant impact. Australia restrict Nathan Lyon just to Tests despite his immense success in that format and South Africa have Keshav Maharaj who is again turning into a Test specialist despite the fact that Imran Tahir is heading into the 40s.

In fact, since the 2015 ODI World Cup, teams had slightly started shifting to more of leg break bowlers than finger spinners. The number of matches played by leg break and off break bowlers for each major team since 2015 World Cup is shown below.

(Disclaimer: This list excludes batting all-rounders or the so called part-timers. So you might want to know that it includes Shakib Al Hasan and Moeen Ali but does not have Suresh Raina or Mahmudullah. Dananjaya is kept in the leg-spinners category because he bowls more of leg breaks and is a mystery spinner more than an offie while Sunil Narine is categorised under off-spinners) 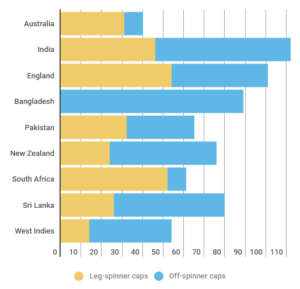 As you see, finger spinners still dominated over the leggies but the more successful teams (England, Australia, South Africa and India) had begun switching over to more of leg-spin. The revolution had just begun in the post-World-Cup and so a lot of teams stuck to their off-spinners post the World Cup. But if you cut down the above list to matches after last year’s Champions Trophy, the results are completely different. 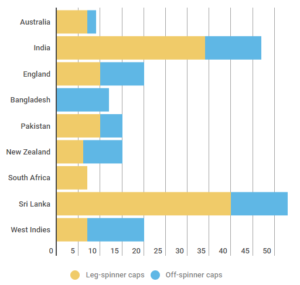 As you see, Bangladesh, New Zealand and West Indies are the only three teams to have fielded more of finger spinners than wrist spinners since the Champions Trophy. The most successful teams (England and India) fielded leg-spinners more often with England have both Rashid and Ali in all of their matches since the showpiece event in June last year.

The step-motherly treatment to off break bowlers can probably be attributed to a few changes in the playing conditions.

The rule change in 2011 which saw two new balls, one from each end, in ODIs.

Boundaries have only gotten shorter over the years and with the cow corner and mid-wicket becoming favoured areas for the batsmen, off-spinners are taken to the cleaners as they bowl mostly into the right-handers (who are obviously more than left-handers).

While the leg-spinner has a slew of variations up his sleeve, off-spinners are usually restricted to the doosra and arm ball apart from conventional off-spin unless you are a Sunil Narine or an Akila Dananjaya. The doosra and teesra are under heavy scrutiny these days and rarely do we see bowlers employing the doosra these days with the fear of being reported for suspect action in the back of their minds.

“You have the leg-break, the googly, the top-spinner and the flipper. When the batsmen are trying to have a go, they often don’t pick these deliveries”, former Indian leggie L. Sivaramakrishnan says. It is this rather varied armoury that makes leggies a favourite in limited-overs cricket.

While finger spinners rely a lot on dusty, dry conditions to generate turn, leg-spinners thrive in most conditions. The ability to generate turn from the wrist means that this category of spinners have no trouble turning the ball on any surface.

Finger spinners, on the other hand, need some help from the surface to generate enough turn to put the batsmen in two minds and induce a false stroke.

While leg-spinners have a natural ability to be skiddy, most off-break bowlers are taught to bowl with a straight arm action in order to generate bounce which is key for them on surfaces with a minimal turn. The bowling arm is usually close to the ear for the off-spinner unlike for wrist spinners who bowl roundarm more.

The point of release is hence lower for a leggie and as such, they generate lesser bounce. With teams piling up on big hitters, getting under the ball to smoke over the fence is a primary aim. Off-spinner’s natural extra bounce means that batsmen find it easier to take them on. This is why we see most off-break bowlers these days try bowling with a round-arm action (ideally have the image of Kedar Jadhav bowling in your mind while reading this)

Whatever the reason, finger-spin is dying and an art which the likes of Saqlain Mushtaq and Muttiah Muralitharan took to the zenith is suffering a rapid freefall in the age and time of Shane Warne’s proteges. Could there be a turnaround? With the breakneck pace at which the finger spinners have vanished from limited-overs cricket, a return to prominence seems rather far away. For now, YouTube into some Saqlain magic or Muralitharan specials in One Dayers to rewind into the beauty of the art of finger spin.