Despite being one of the smallest football nations, Uruguay has one of the most illustrious histories – here’s a top five of near-perfect performers

In the first World Cup in 1930 hosted on home soil, Uruguay continued to shine having already making a big impression during the 1924 and 1928 Olympics. The team, captained by José Nasazzi, put on convincing displays and scored a ton of goals with the top-scorer being Pedro Cea who racked up four strikes in the three games leading up to the final.

The occasion didn’t paralyze his predator instincts, though, and the forward scored another, this time a crucial equalizer in an eventual 4-2 win over Argentina. Uruguay made history by winning the first ever World Cup and Cea was a real protagonist in the success.

Being the final nation to qualify for the 2010 World Cup, not much was expected from Uruguay but Óscar Tabárez’ men arrived in South Africa with real conviction. La Celeste proved to be a tough team to beat as they reached the semi-finals. The focus lied on defensive solidity and discipline but Uruguay would never have had the run they had if it wasn’t for one man – Diego Forlán.

The forward, plying his trade for Atlético Madrid at the time, was the footballing leader during that tournament. Forlán came up with several beautiful goals, that also were of great importance, and was deservedly awarded the Golden Ball as the tournament’s best player.

With a total of eight goals, striker Óscar Míguez is Uruguay’s all-time top scorer at the World Cup and it makes him a prominent figure in the nation’s football history.

Míguez’ most important moments in the sky blue of Uruguay came against Sweden at the 1950 World Cup. Uruguay were trailing and needed a win to keep their chances of becoming world champions alive. Míguez scored two goals in the last fifteen minutes of the game to ensure that Uruguay were going into the last match against Brazil with a shot at the title. Then, history happened.

Whatever happens in the next World Cup, it is almost impossible to think that something will surpass Alcides Ghiggia’s winning goal against Brazil in the 1950 World Cup final. Playing in the Maracanã in front of an incredible 200,000 people, Uruguay enjoyed the greatest day in its illustrious history and right-winger Alcides Ghiggia was the hero.

Ghiggia scored four goals in the whole of the 1950 World Cup and announced himself on the world stage with his impressive performances leading to a move to Europe a few years later. His goal in the final is engraved on the minds of every Uruguayan.

No person in Uruguay’s famous footballing history is more legendary than the great Obdulio Varela. ‘El Negro Jefe’ will always be the instigator of the biggest World Cup shock known as the ‘Maracanazo’. Ahead of the final against Brazil in the Maracanã, the public perception in Brazil was that the title was won and beating Uruguay would be a formality.

Captain Varela was preparing his teammates, diminishing the media’s build-up by delivering a motivational speech which included the most famous line in Uruguayan football history: “Muchachos, los de afuera son de palo” (Guys, outsiders don’t play), urging the team to ignore the fans and focus on the game. 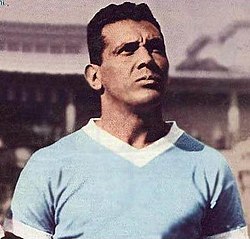 Despite all of that, Brazil opened the scoring early in the second half and 200,000 fans were going crazy. Varela then showed incredible gamesmanship. The captain argued over the validity of the goal and even got an interpreter involved. Varela knew full well that the goal was fair but only started the lengthy argument with the referee so that by the time it ended, the crowd had calmed down.

Then Varela took the ball to the center of the pitch and shouted to his teammates, “Now, it’s time to win!”. Uruguay went on to famously beat Brazil, bringing the whole country to a state of euphoria while putting Brazil into a state of depression.

Not World-beaters yet, but Asia shows improvement in Russia 2018

Video: Looking back at a fine day for France who run rampant in Russia

Der Klassiker: The clash of the German Titans

When Diego Maradona played in Spain

Real Madrid should be the next destination for Erling Haaland

Igor Gomes: The next target of Real Madrid

The enormous holes at the top of the Indian order

“It’s Tottenham” – why nothing ever changes for sorry Spurs