The start of the World Cup may just be hours away, but the people of Moscow have yet to get the buzz despite fans from all over the globe pouring in

It’s all quiet on the Eastern-European front!

Russia now has the dubious distinction of possessing the lowest FIFA ranking of any country at the 21st edition of the World Cup – not ideal for a team hosting the competition. The country is also the lowest-ranked of any nation to host the World Cup.

This statistic aptly describes the footballing situation of Russia where even the bronze statue of legendary goalkeeper, Lev Yashin, has been left alone in an unkempt corner during the quadrennial tournament.

Yes, the late Yashin’s club, Dynamo Moscow, is being reconstructed. One of the most famous bronze statues of the iconic footballer has been left deserted at the entrance of the club with workers continuously trying to complete the rebuilding of the club’s stadium for Russia 2018. It could have been completed much earlier, definitely.

Fans on a football pilgrimage from all over the world are starting to conquer the roads to the historic Red Square, something which even the Germans could not do during the days of World War II. Two days before the big kick-off of Russia taking on Saudi Arabia, when CricketSoccer visited the Dynamo Moscow club, the fence had to be crossed to take a picture of the sculpture from the front. 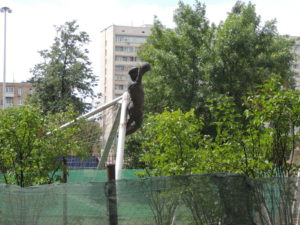 Amidst the dirt lay the late Lev Yashin, the first and the only Ballon D’Or winner to ever wear goalkeeping gloves.

A sad story indeed. It sums up how Russia has yet to be fully geared up for the World Cup.

The stadiums, the roads with hoardings, and the media centers are ready.

The people of Russia? The great football fiesta?

When quizzed, my Russian cab driver Vadim replied in English and the disinterest was clearly to be seen. Kicking his leg in the air to make me understand ‘football’. “Good for Russia, people are coming. We are working overtime. But I do not follow football passionately.”

Taking a stroll through the historic Red Square in the evening and there are people with guitars, mandolins, and string instruments celebrating the gathering with songs coming straight out of their hearts that can be understood if you have a little feeling for the language of music. That’s pure joy. 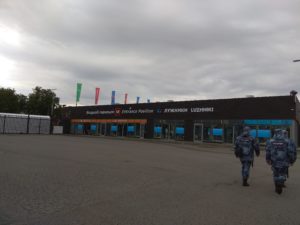 But is there joy for football?

The reasons may be many. One is the comparative low success of the Russian national football team. Without Igor Akinfeev, there is no real star. And football fans from other countries have only just started to hit the roads of Moscow.

No Azzurri, no Oranje. Two of the most colourful sets of fans in world football will be absent since Italy and the Netherlands could not make it to Russia. Brazil will play their first match at Rostov-on-Don. Naturally, Samba fans are now in Sochi where the Neymar and the Coutinho are based. Before La Albiceleste plays their first match against Iceland at Spartak Moscow, fans will definitely dominate the extra-wide lanes of Arbat Street and Sportivnaya Metro station, adjacent to the Luzhniki stadium.

A lack of enthusiasm is not down to the rain or a sudden drop in temperature, Russians are pretty accustomed to this type of weather in summer. It’s just that two days before the inaugural match of Russia 2018, football fever has yet to leave its grip on Russians. But a win against Saudi Arabia might change all that.

Brazil should be concerned of their defence