“Brathwaite, Elgar, Ali, Cook and Karunaratne are possibly the last few openers in Tests for whom balls consumed and time hold value. Can we applaud them too”?

When Virender Sehwag walked in and bludgeoned his way to a Test hundred in the first day of a Test match, the very definition of a Test opener was rewritten. Traditionally, any batsman who could occupy the crease long enough to take the sheen off the ball was seen as a good opener. Of course, he had to score big every now and then but in tricky conditions, if he could grind it out for long periods even without scoring a whole lot of runs, it earned rave reviews.

Modern day Test cricket, though, works on different metrics. Balls faced is a statistic that has even lesser importance than strike rate in Tests these days!

This is appalling for strike rate has little meaning in Test cricket where all you need to do is make enough runs and take 20 wickets. Yet, such is the wave that huge bats, short boundaries and mini-over games generated that today an innings where balls faced is double that of runs scored is looked down upon.

In the sheet where you have the list of 50 innings’ by openers with the most number balls faced in an innings, there are just six post-2010, two of them by Alastair Cook, perhaps the must traditional opener still playing Test cricket.

The other names are along familiar lines – Azhar Ali, Kraigg Brathwaite, Taufeeq Umar and Tino Mawoyo (a bit of an anomaly here) but the bigger question is why modern day openers aren’t bothered about their longevity at the crease.

Brathwaite and Dimuth Karunaratne, in two innings’ on the same day from different parts of the World showed just how important the number of balls faced by an opener is.

Brathwaite played out as many as 279 balls in his 110, grinding down Bangladesh bowlers with his will and tendency to occupy the crease. Even as Mehidy Hasan initiated early panics with the wickets of Devon Smith and Kieron Powell, Brathwaite held his own, batting time and making the visiting bowlers work hard.

There are more naturally talented batsmen around the world game; but there is no more workmanlike, diligent and hardworking young batsman in the Caribbean than Kraigg Brathwaite. Congrats on his 8th Test match century.??????.

Brathwaite isn’t averse to such knocks as his name in the earlier list suggests. He has played 49 Test matches so far and has faced 200 or more balls in an innings eleven times already. His career strike rate of 41.67 can easily be scoffed upon in the Caribbean Islands where T20 is a way of life. But his value to their Test side is immense.

In the Kingstown Test in 2014 against the same opposition, Brathwaite had weathered the storm for a whopping 447 balls in a marathon knock of 212. The double-century is etched into the minds of many but hardly anyone notices the sheer amount of time and balls he played out to get those runs. Red ball cricket is making hard runs when the chips are down and Brathwaite, unlike many of the modern era, is adept at it.

Almost 14,000 kms away, Dimuth Karunaratne had compiled an equally effective knock earlier in the day. Another opening batsman in the mould of yesteryear openers, Karunaratne stood tall against a sharp Proteas attack and took Sri Lanka to a more than formidable total.

Carrying the bat on the first day of a Test:

The fact that Sri Lanka’s no.10 and no.11 faced more balls than eight of the remaining nine batsman show how flawed their batting was. Karunaratne, unperturbed by the tendency of his colleagues to throw away starts, stitched together a mammoth hundred, which arguably could turn the whole Test match on its head.

Like Brathwaite, Karunaratne is known for spending time at the crease. He has batted for more than 71 hours in the last two years in Test cricket, the fourth best among Test openers after Dean Elgar, Alastair Cook and Azhar Ali. Brathwaite comes fifth in this list, a shade below Karunaratne in terms of minutes.

The below graph shows balls faced, minutes played by some of the best openers in the last two years (from July, 2016). 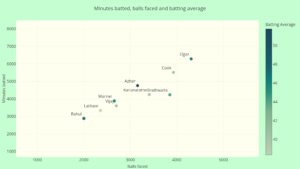 In terms of balls faced, Elgar, another fabulous opener whose ugly batting style is often joked about, tops the list. Dean Elgar is probably the least talked about name in a batting line-up that has Faf du Plessis, Hashim Amla, Quinton de Kock and a Test ago, AB de Villiers. But the South African has played out a stunning 4308 balls in the last two years, the most by any Test opener. The next best is Alastair Cook with 3927, followed by Kraigg Brathwaite with 3849.

While Test cricket scales new heights, it is imperative to note that the basics remain the same. On competitive surfaces, batsmen who play out time and balls are as valuable, if not more,  than the ones who score runs. When they are openers, this criteria is as important as the number of runs they make. Brathwaite, Elgar, Ali, Cook and Karunaratne are possibly the last few openers in Tests for whom balls consumed and time hold value. Can we applaud them too?

Holland and Austria advance to the next round

CricketSoccer Desk - June 21, 2021
0
After that epic encounter at the Johan Cruyff Arena against the Dutch, it was expected that Ukraine would go a long way in the EURO 2020 – their fighting spirit and the coordination between the players showed a lot of promise, but as the tournament progressed they lost their firepower and right now, they are out of the mega-event.