“Rohit has a trigger movement on the front foot, which he barely tries to control when the ball is on a length and in and around a fifth stump line”

There is an interesting insight from India’s net session during the New Zealand ODI series in October last year. Threatened by Trent Boult and India’s calamities against left-arm seam, Arjun Tendulkar was called up to the nets for a much needed workout. The first delivery Rohit Sharma faced off Tendulkar junior in the nets was an inswinger that curved back in and pinged him on the back-foot.

In many ways, it exemplified Rohit’s weakness against left-arm seamers, and in general swing bowling. While a majestic batsman when on song, Rohit has issues on wickets or conditions where the ball moves about for the simple fact that when the ball does move into him, the right-hander tends to fall over on the flick or on defence.

At Leeds, in the series decider between England and India, Rohit Sharma barely moved his feet in his eighteen ball stay at the wicket. There were as many as four plays and misses, all off the first over from Mark Wood, and two mistimed shots in his innings. Off David Willey, who consistently moved the ball back into the batsman, the opener was wary and stuck to playing the ball on the on-side with soft hands.

Perhaps, Rohit is well aware of his fallacies against this genre of bowlers. He was careful to watch the ball until the very last moment and nudge the ball carefully through the leg-side. Yet, when Willey kept bowling at his legs, Rohit unleashed a flick that went straight to deep square-leg. Another day or against another bowler, the opener might have cleared the ropes but left-arm seam just isn’t his cup of tea.

Roll back to the Champions Trophy final at The Oval and you get a fair idea of why we are discussing this even when the Mumbaikar has had a pretty good outing in England so far. Then, Mohammad Amir, pumped up and getting sharp inward movement, curved one back into Rohit and the opener pushed half forward exposing his pads ahead of his bat. The result was a deafening shout for leg before wicket that the umpire vindicated.

It wasn’t to be the first or last time Rohit would falter against the left-arm seam. He was troubled by  Trent Boult, Jason Behrendorff, Mustafizur Rahman and Lonwabo Tsotsobe either side of the Champions Trophy debacle.

He has been dismissed off the left-arm pace a whopping 22 times in ODIs and averages 23.22 against these kinds of bowlers, his worst against any kind. Rohit’s escape shot, as it showed at Leeds, is to try and ruffle the seamer with an aggressive approach but it has mostly resulted in his dismissal.

Having said that, it was Mark Wood who put the Mumbaikar in a fix with his immaculate lines and movement off the deck. Rohit has problems in countering early movement, most evident when he played and missed umpteen times off Dale Steyn a few years back to evoke applause from the crowd when he eventually got off the mark.

Rohit has a trigger movement on the front foot, which he barely tries to control when the ball is on a length and in and around a fifth stump line. In that corridor of uncertainty, the opener tends to go hard at the ball, resulting in an edge to the cordon or multiple plays and misses.

If that weren’t enough to cause problems on seaming surfaces, the ball that comes in also pushes Rohit into an uncomfortable position where his head falls over on the defence.

Teams have exploited that against Rohit, as evidenced by a median of 21 runs in ODIs (shown graphically by Twitter user @hganjoo153), a limit before which the opener is fairly easy to dismiss. 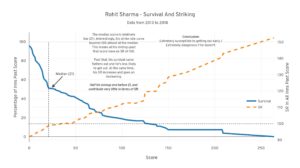 Beyond the limit, Rohit is virtually unstoppable, and also strikes at a much threatening strike rate. Half his innings’ though end before the median as the user points out which means the best time for opponents to attack the opener is when the ball is new and swinging.

England haven’t made the best use of his weaknesses in this series but with flattened out tracks, the seamers weren’t helped much in their venture. With the Leeds surface offering something, England’s bowlers were quick enough to latch onto Rohit’s weakness yet again. Is he still vying for a place in the Test team?