“Seldom has there been such universal celebration at the end of a game. Or two. A win for everyone”

Ostensibly, India are playing England at Old Trafford. The first T20I of the long tour.

Kuldeep Yadav has already tied, shackled and trussed the England batsmen in convoluted knots. And now KL Rahul is blasting his way to a classy hundred, making a meal out of the one-sided affair.

The sport in general consciousness is, however, different.

In the pressbox, television sets hang as usual. The telecast deferred by a few seconds, so that journalists can double check what they just saw in the field of action.

However, today there is a difference. The eyes of most of the journalists, and even the three young stewards working in the dining area behind the pressbox, are glued to two of the television sets. Especially the English contingent. And not just when the action on the field is done for that ball, not just when some vociferous appeal needs to be evaluated on the screens.

In fact, the said couple of sets are not even showing the match, or even cricket.

The pictures are coming in from Spartak Stadium, Moscow, where England has kicked off against Colombia in the round of 16 match.

Hence the gasps, groans and claps of glee even while the field just changes over. The excitement spilling over even as the bowler just walks back to the bowling mark.

“My superiors will be shocked if I tell them you guys are watching football,” the concerned floor manager warns as he sees the three stewards, far away from their workstation behind the food counter, craning their heads to catch the football action on the press box screens. One of the three kids returns an apologetic glance, but makes no attempt to move. The other two do not even bother pretending that the words have made through.

Chris Jordan’s outswinger is nonchalantly creamed over cover for six. Rahul seems in blistering form. But the eyes anxiously follow the corner kick that has the ball floated dangerously over the English goalmouth. 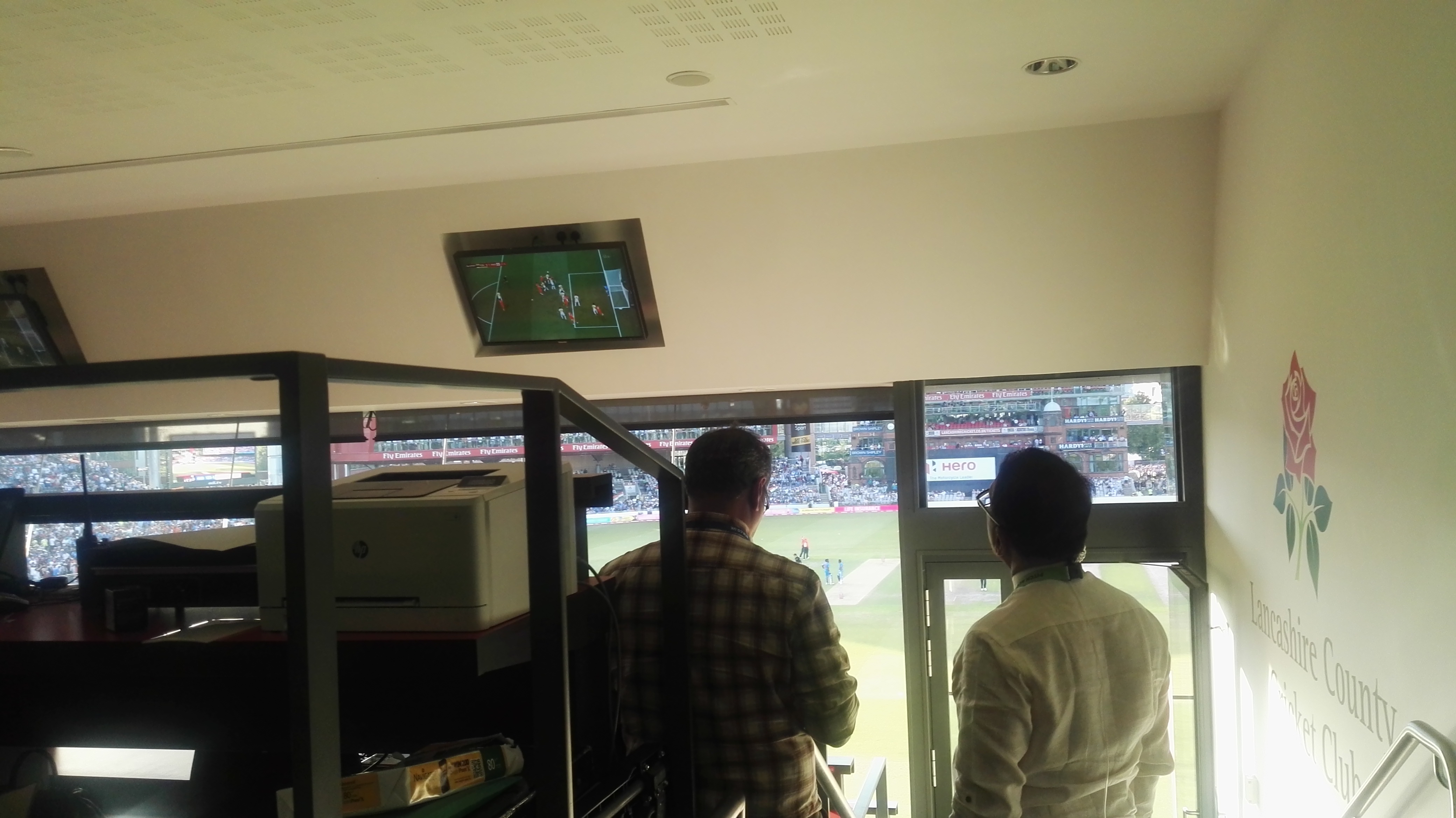 Even before Moeen Ali trots up to start the over that will be the last, a while before Virat Kohli jumps down to dispatch him wide of long-on, several pressmen make a beeline for the dining room where the post-match press-conference will take place. The sense of professional duty? Well, duty to the country perhaps. The room, after all, has a television set where the volume can be turned up. Just a few minutes to go, and England is still 1-0 up. They have lost you say? Oh, you’re talking about this cricket match … there are far more important things taking place.

But there comes a synchronised and spontaneous sound of breaking hearts from all around the media centre.  Yerry Mina’s header from a brilliantly floated corner has lodged at the back of the English net … that too, well into the injury time.

As the final whistle is blown, people are getting ready for the press conference. Or setting themselves up to watch the extra-time. Penalty shoot-outs are risky, even ominous for England. They have a horrendous track record there.

Eoin Morgan comes in, as always, to take the brickbats when the team has lost. He takes the questions professionally, sedate and sensible in his answers. But then his head jerks to the side, as he tries to see the television screen at the other end of the room, as another of England’s numerous attacks is foiled at the Colombian goalmouth. He does not quite catch the question and it has to be repeated.

“If given a choice, would you rather England had won this match or the one against Colombia?” the question is not asked, but would have made a lot of sense and asked for quite a lot of ingenuity on the part of Morgan. He leaves the conference, feet navigating towards the door, eyes glued to the television set.

It is now the turn of Kuldeep. He speaks decent English, and answers a couple of questions from the English press. But then someone throws him a query in Hindi and he switches languages. The men from England cannot follow any more. So heads turn towards the football. Well, not quite. Several of those heads, even some Indian ones, had already been turned towards the television.

And as Kuldeep answers another question, there is a collective groan which takes the wrist spinner by surprise. But England has just made a mess of another golden opportunity in the Colombian goalmouth.

Kuldeep leaves the room. It is followed by the second long whistle. And groans. “Don’t tell me it’s going to be penalties.”

Back to the pressbox across the corridor.

Now that the cricket is over, the television sets in the pressbox show only football. Every pressman is there. And some who are not quite pressmen. Like those three young stewards. The floor manager may be scandalised. But they have perched themselves in a comfortable corner towards the back of the box and are immune to any distraction in the way of seething employers.

Every goal by England is cheered, and groans greet every Colombian shot that finds the back of the net.

Falcao scores, as does Kane. Cuadrado nets it. Rashford slots in the second. Muriel makes it 3-2. And then there is stunned silence. Henderson’s strike is stopped. The journalists, the stewards, the floor manager … no one can believe it. A large section of the crowd remains waiting. A giant screen shows the match on the ground. There is silence all over.

And then the whole place erupts. Uribe has slammed his spot-kick into the crossbar. And Trippier beats Ospina. The stewards and the scribes are exchanging high fives now. 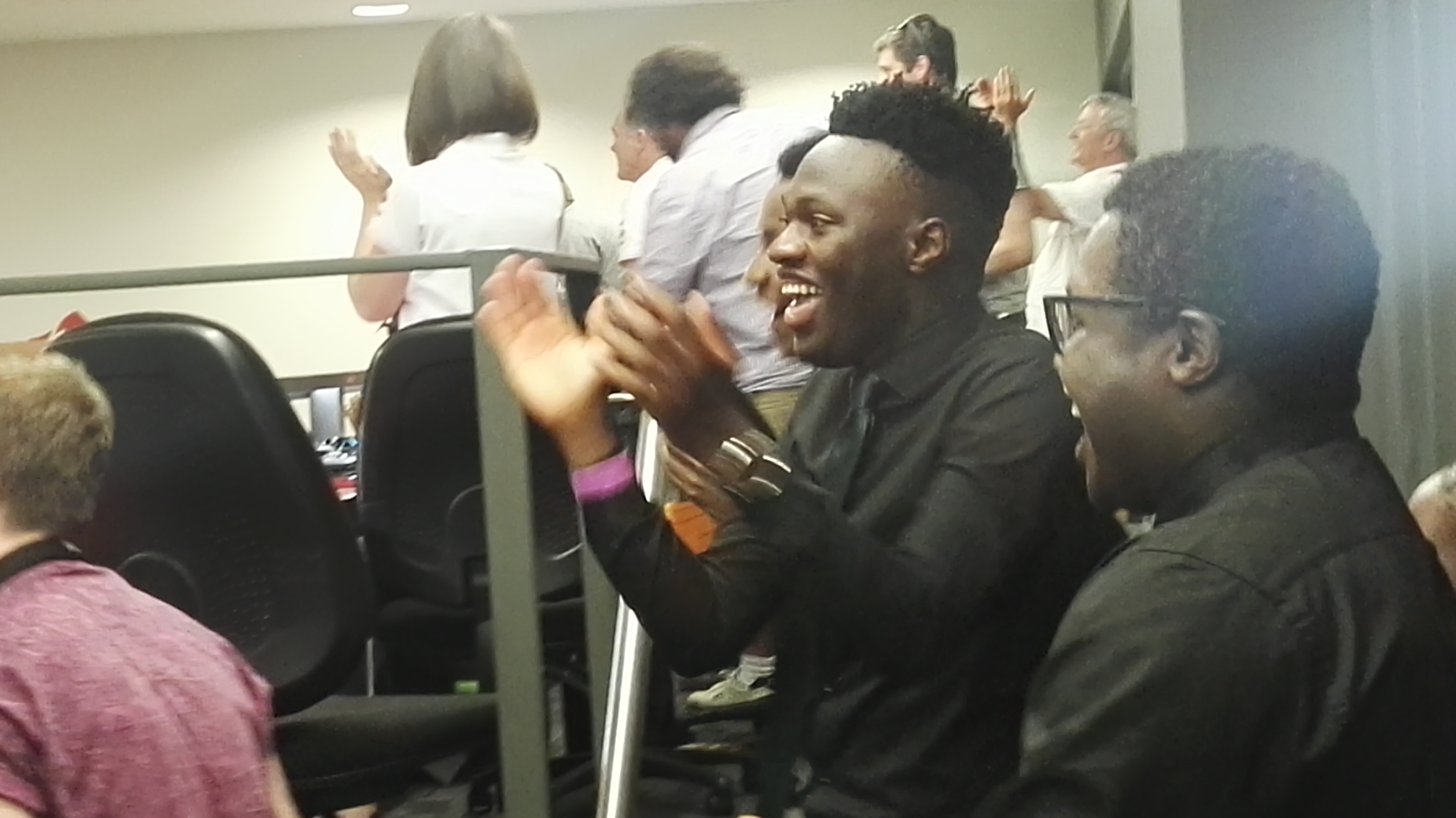 The young stewards rejoice as the final goal is netted

A few seconds later it is pandemonium. Pickford’s left-hand punches the Bacca shot away and Colombia has missed their second one. Eric Dier, No 4, comes up for the crucial kick. The tension in the room can be cut with a knife.

And the right-footed strike zooms past Ospina’s right hand and finds the net. England have won. And the press box explodes.

Seldom have there been such reaction at the conclusion of a match. Professional journalists most often approach their job clothed in a cloak of neutrality, emotions held in check. Well, almost always. Hired stewards dutifully stand by the food table.

But here they are clapping, cheering, hugging each other like the most besotted of fans. The English stiff upper lip is conspicuous in its absence. This is perhaps what sports is supposed to be.

As one takes the tram back to Manchester Piccadilly, the sights and sounds are incredible. The men in English cricket shirts, brandishing English flags, are the most delighted of fans, in spite of the huge 8-wicket loss. They spontaneously burst into “We are the England fans”…

They had come to win. They have won. Maybe not in the game that they had come to watch. Maybe the victory has been achieved thousands of miles away from Old Trafford, in distant Moscow. But, no one cares.

And the hundreds of men in blue, who had come to cheer their own team, many failing the Tebbit-test in the process. They join in the chorus.

Seldom has there been such universal celebration at the end of a game. Or two. A win for everyone.