With the hosts staring down the barrel after Mohammad Abbas, Mohammad Amir and Shadab Khan scythed through their top 5, England needed Joe Root, their skipper, to rally together the tail and give Pakistan a formidable fourth innings target. On 68, Root had played a fine innings, looking as sublime and flair-oozing as the most in-form of batsmen. Yet, when Mohammad Abbas seamed one back into Root in the 42nd over, the Yorkshire boy had no answers. He was trapped in front for another half-century not converted to a hundred.

The conversion rate had always been Joe Root’s problem. Even as his name in the Fab Four shines in gold, Root’s Test record has an anomaly when compared to the other three. The English skipper has 40 half-centuries in Tests but just 13 hundreds, not the kind of numbers you expect from a batting lynchpin at the top of the batting order.

This has been true across formats for the stylish Yorkshire batsman. In all International cricket, Root has 26 centuries and 72 half-centuries, which means he converts his 50-plus scores to hundreds only about 26% of the time. In Tests, that number is less than 25%.

The impediment of not being able to haunt back his demons was evident at Lord’s two weeks back when Root slammed India’s bowlers around the stadium to knock off a fabulous ton, helping England set up an eventually match-winning score of 322 in the first innings.

Hundreds weren’t Root’s only problem. Consistently scoring them was perhaps the issue. He silenced his inner voices with another ton at Leeds to lead England to a series win against the visitors. Root had scored back to back hundreds only once in his entire career, two years back against South Africa in an ODI series. But this was special, for his first ton had come 129 days after his previous International hundred, a fine century at Dunedin against the Black Caps in an ODI.

In Tests, that number stands at 342*. As England take on India in the first Test at Edgbaston on August 1st, Root will have played out 349 days, almost a year, without a Test ton to his name. His last one had come against the Windies at the very same venue the first Test is scheduled to take place.

His animated celebration after the second successive century at Leeds has earned a place all over the internet but Root himself was “embarassed” by the same. “The ‘bat-drop’ was something I immediately regretted!”  Root had said. “It was the most embarrassing thing I’ve done on a cricket field and I don’t think it will be the last I hear of it from the group. They [public] have been hammering me. You’d think if you were going to do a celebration like that you would have smacked it 30 yards back, but it didn’t quite get there. It was an absolute car crash.”

Embarrassing or not, it gave him a mighty confidence boost ahead of the massive Test series against the same opponents. Root’s position in the England Test side is currently at no.3 after the Ashes debacle which means he will in all likelihood come in after Alastair Cook and his partner (another controversial debate altogether).

India’s new ball bowlers have been pretty good outside the sub-continent in recent times which means that Root is likely to face the music quicker than he might anticipate, particularly since Cook’s partners haven’t had the juiciest of runs.

Root’s immediate attention in the past few series’ has been to consolidate the damage. He has done that pretty well apparently given that he averages 42.72 in Tests since his last century. Root has played in 11 Tests in this time period, knocking off 10 half-centuries. This virtually means he hasn’t been out of form all this time. He has just not been kicking on. 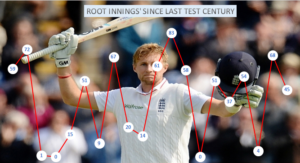 His scores since that last hundred make for fascinating viewing. The zig-zag graph shows how Root has been there and thereabouts but not really barging through the roof. His numbers are good for a no.5 batsman newly inducted into the Test side. But for the batting mainstay or anchor in a promising Test line-up, they are average, if not mediocre.

More appalling has been the manner in which he has been dismissed in this time frame. While Root has worked hard (from no.4 mostly) to resuscitate the innings with the top order failing, he has been rather careless after settling down at the wicket. In a line-up that did not have a solid no.3 or a no.5, Root’s contributions were just not enough to give England a cutting edge. Since he had found the rhythm in most of these matches, the team needed him to make it big and score a massive century. Instead, it has all been impressive 50s and 60s but nothing more.

The successive tons against India must have put Root in a better frame of mind, much to the relief of England fans. But the more prominent question is if he can maintain his consistency and continue to make big scores in the next two months.

The silent rise of Ishant Sharma

Dazzling Denmark progress to the next round after thrashing Russia

CricketSoccer Desk - June 22, 2021
0
If any team deserved to progress to the next round then it has to be Denmark after all they had gone through in the last couple of weeks. They were dubbed as one of the tough contenders but when Christian Eriksen collapsed at Copenhagen in the match against Finland, the scenario changed and they lost two consecutive matches.

South Africa thrash West Indies, whose batting let them down

Holland and Austria advance to the next round