Exceptional analysis, insightful data-oriented team selections, nothing could save England from collapsing against some incisive bowling from the Indians at Trent Bridge. Having made two changes to their playing XI for the fourth Test, England hope to rectify what went wrong in the third Test. But is it just about personnel? Haven’t they got three of the most prolific Test batsmen in recent times in Joe Root, Alastair Cook and Johnny Bairstow? Why has their batting still not withstood the visitor’s bowling?

A simple twist of the Rubik’s cube might be all it takes for the hosts to rediscover their mojo. Before we look into the batting order fallacies it is important to understand just how pathetic England have been at home in recent times. Among major Test playing teams since 2015, England batsmen’s combined home average of 31.73 is worse than South Africa, Australia, India, Pakistan (in UAE) and New Zealand. This is strange when you consider the kind of success England have had at home. The clear indicator here is how their impeccable bowling attack has made up for their issues with the bat. 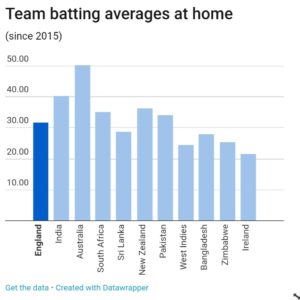 Dig into where exactly they have problems and glaring issues crop up everywhere in the batting line-up. At home, from batting positions 3-7 in the middle-order, England average a rather decent 37.44 since 2015. Though lesser than India, South Africa and Australia, these aren’t really bad numbers and it could even be misleading if you omit where exactly this kind of an average comes from.

Johnny Bairstow, Ben Stokes and now Jos Buttler have played a part in boosting that average from the lower middle-order (6 and 7). This is evident when you cut down to positions 3-5 and check averages of England batsmen in comparison to batsmen of other nations at their respective homes. 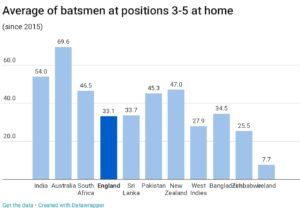 The average now drops to 33.11 since 2015 which is lower than that of India, Australia, South Africa, New Zealand, Bangladesh and Sri Lanka. This essentially conveys how pathetic the trunk of England’s middle-order has been at home.

Add in the woes at the top of the order and England have several worries in their batting line-up. England openers average 34.04 at home since 2015 which are freakish numbers even considering the kind of difficulty openers face in this part of the world. Needless to say, it comes way down in the list of averages of openers from other teams at home in this time frame. 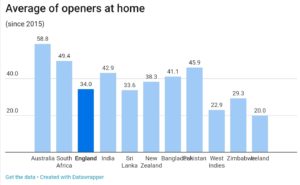 Much of these woes could be attributed to struggling to give adequate support to their batting mainstays – Cook, Root and Bairstow. No team is expected to have seven incredible batsmen at the top of the order. Three of them is more than sufficient to build a world-class team but the remaining at least have to back-up the efforts of the three and provide adequate support. While Cook’s numbers are very ordinary in this time frame, it could also stem from inconsistency in partners (I have described on this in an earlier article: Alastair Cook’s mangal dosha

Root and Bairstow, though, have incredible numbers in this period. Yet it has translated into very little bonding time. During the Edgbaston Test, I had recounted on why these two need to bat together more often. In 13 innings’ together (including Edgbaston first innings) since the beginning of 2016, Root and Bairstow average 50.36 with two century partnerships many half-century stands.

In the Ashes, the duo batted together just twice with one of them coming only due to an injury to Root. When you have two world-class players in the same time, why wouldn’t you give the two more time to bond?

The obvious, almost instant solution staring at you, is to move Root back to no.4 which puts Bairstow in at 5 and the two get enough time. But then who bats at 3? A left-field choice would be Ben Stokes.  A move to no.3 might cause an uproar now but it was discussed briefly during his brilliant counter-attacking hundred against Mitchell Johnson and co in the 2013 Ashes debacle.

But it really needn’t be this complicated if Bairstow can give up the gloves. Jos Buttler can take up wicket-keeping duties and Bairstow can be pushed to no.3. While it is only natural to wonder why Root can’t remain at 3 with Bairstow at 4, stats suggest that Root is better suited to 4.

There could be multiple reasons for this:

1. He faces the new ball rather early with Cook’s inconsistent form and his partner’s rotating without success.

2. He loves acting as the anchor between the top order and the lower middle-order.

Either way, the move to 4 for Root could work wonders for England. First, it puts Johnny Bairstow, a more composed, yet counter-attacking batsman after Cook and Jennings. The openers are both resilient, defensive batsman and allow bowlers to dominate. Bairstow at 3 could put the bowlers off their channels with his approach, something he did with aplomb a few times in the last couple of series’.

Then comes Root with all his experience, serenity and panache. Add in Ben Stokes, Moeen Ali, Jos Buttler and the young Sam Curran and the line-up suddenly has an intimidating look. So, could it just be a case of a simple batting order switch? Probably. We might never know until England decide to throw caution to the wind and experiment.

The silent rise of Ishant Sharma

CricketSoccer Desk - June 24, 2021
0
Since that quarterfinal encounter between Brazil and Colombia, the clash between the two countries has never been the same. It offers more ragged displays rather than rhythmic football and controversies just add more fuel. The Group Match encounter was no different either – Brazil won in a tight finish but the match left a bad taste due to a controversial referee decision.

Group of Death: France, Germany and Portugal progress in a dramatic...

Spain smash five, Poland are out

New Zealand are the best Test team in the World