“However, it must be remembered here that Ishant has played 11 of his 31 Tests over this period at home on pitches mostly designed for spinners. Three of the remaining Tests were in Sri Lanka and one in Bangladesh, accounting for almost half his career over this period”

It is easy to dismiss Ishant Sharma. He may have 256 Test wickets, but his bowling average (34.73) is the second-worst with a 200-wicket cut-off and the worst among fast bowlers. His career has already spanned over eleven years, and not for once across this period has he looked the spearhead of the Indian pace attack.

The one problem we often encounter while dealing with numbers is that we do not dissect deep into them. Ishant’s numbers obviously look ordinary as a whole, he has shown significant improvement over time.

The Lord’s Test of 2014, where Ishant demolished England in the fourth innings with 7/74, was the turning point of his career. Since that Test, he has had 89 wickets at 29.01 – the best for an Indian fast bowler with a 50-wicket cut-off.

However, it must be remembered here that Ishant has played 11 of his 31 Tests over this period at home on pitches mostly designed for spinners. Three of the remaining Tests were in Sri Lanka and one in Bangladesh, accounting for almost half his career over this period.

Surely we need to make some allowance for performances outside Asia. How have fast bowlers across the world fared outside Asia over this period?

You see the point? Ishant and Shami are the only Asians on the list, and Ishant’s numbers are superior to Shami’s by some distance.

Do note the names above Ishant. All of them belong to fast bowlers bred on wickets conducive to seam bowling, and their numbers are bolstered by home performances. Gabriel’s rise has been due to the recent West Indian trend of green pitches at home, while Hazlewood is the only Australian to have done better than Ishant.

But what about England, where Ishant has played 7 of his 16 outside-Asia Tests over this period?

The general perception is that Shami is the greater threat of the two. While this summer has altered things, the change had started in 2014. In fact, Ishant has been the best of the Indians – even if there is no wicket cut-off.

In fact, the career graph for Ishant looks significantly upwards since that Lord’s Test. 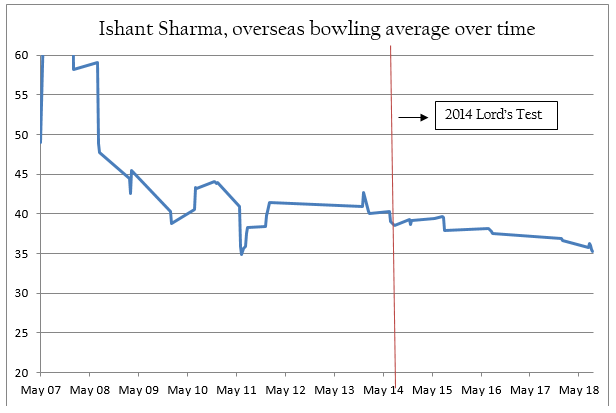