“While they were way better than the global averages before the 2015 World Cup, the gap has closed out in the next few years. Familiar woes including that of handling pressure and being level-headed in run-chases are yet to be addressed”

As South Africa brushed aside Zimbabwe at Bloemfontein and soaked in the return of their prodigal son, Dale Steyn, one couldn’t help but wonder if the Proteas were counting their chickens way too early. That they were left gasping for thin air and rescued by a late blitz from Dale Steyn and Andile Phehlukwayo should ideally have worried the South Africans whose World Cup preparations were already hampered by the loss of AB de Villiers (to his whims and fancies) and Morne Morkel (to Kolpak).

The inconsistency in the batting is a problem that has escalated to unprecedented heights in the last few months. While the Test series win over India and the subsequent domination over Australia at home kind of masked the horrendous ODI series loss to India at home, familiar batting issues are cropping up yet again. Their top-order has shown glaring weaknesses against spin and a lack of temperament among some of the new crop of batsmen is even more worrying.

Dean Elgar’s return to the ODI fold too bore no fruit as he went after wide deliveries, hanging his bat out to dry. Elgar may be a stop-gap option that was pushed in at the top of the order in de Kock’s and Amla’s absence but Aiden Markram, Reeza Hendricks and Christiaan Jonker (a wild untimely slog has suddenly put his International career in doubt even before it has begun) have all been guilty of throwing it away.

The bowling has been better oiled but the absence of economical options has seen South Africa leak runs in an unfamiliar manner. Everything about their World Cup journey has a familiar feel about it and there are obvious reasons for it.

Over-dependence on too few in batting

Proteas have often been guilty of leaving it to too few to carry them to the final stages of a World Cup. Between the 2011 and 2015 World Cup, Hashim Amla and AB de Villiers racked runs up like never before and aside from Quinton de Kock, who hit a low patch at the World Cup, none of their batsmen averaged more than 40. Appallingly, Duminy and du Plessis scored at averages close to 35 and strike rates bordering 80. The dependence on de Villiers and Amla stood out in their World Cup campaign. Miller chipped in thankfully but still, the lack of some kind of support from the others cost them too big, particularly with their balance skewed in the absence of Kallis. 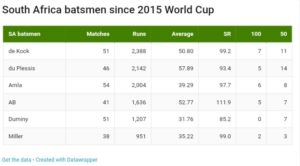 Since 2015, the story isn’t too different. Amla, de Kock, du Plessis and de Villiers have amassed tons of runs averaging above 50 but the support-cast has been worryingly off colour. Duminy and Miller have a susceptible average and haven’t scored when the team needs them to. Among the new recruits, none other than Heinrich Klaasen has impressed much. Reeza Hendricks and Dean Elgar’s recalls haven’t been too promising.

What did aid Proteas at the World Cup in 2015 was a sharp bowling attack, well rounded from all corners but they missed a reliable fifth bowling option. Dale Steyn, Vernon Philander or Kyle Abbot, Morne Morkel and Imran Tahir completed a rejuvenated attack, sharp on all counts. Since 2015, their major boost has been Kagiso Rabada and Lungi Ngidi of late.

Andile Phehlukwayo has donned the all-round role respectably but the economy rates are soaring like never before. Except for Imran Tahir and Tabraiz Shamsi, the other bowlers, who are in the plans for the World Cup, give away runs at over 5 an over. Rabada and Tahir have picked up bucket loads of wickets but the reliance on them is evident. 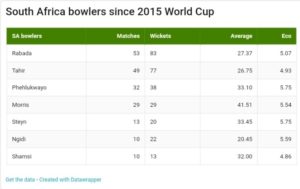 The next highest wicket-taker is Phehlukwayo with 38 in 32 matches. The vast bridge between the two at the top and the remaining could be attributed to many newbies coming into the setup. But even the soaring modern day run-rates do not justify South Africa’s economy rate issue.

The crux of the World Cup team is still forming but the situation is so vulnerable that one injury could leave them handicapped before the marquee event. The bowling is shaping up decently with some of the new names making a mark while the all-rounders have increased in number. The difference between them and the rest of the World, though, throw a bleak picture. 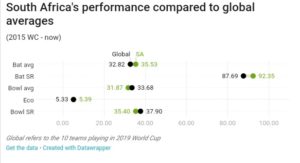 While they were way better than the global averages before the 2015 World Cup, the gap has closed out in the next few years. Familiar woes including that of handling pressure and being level-headed in run-chases are yet to be addressed. The core group is still in its formative days and South Africa are no closer to identifying their World Cup options as they were at the Champions Trophy last year. If anything, they are pegged back a few steps after de Villiers and Morkel’s departures.

Zimbabwe should not lose heart

Watch out for the Phalaborwa Express