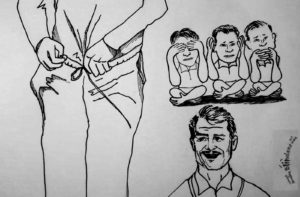 The Sandpaper-Gate incident was unfortunate. At the same time, it was perhaps understandable.

Ball tampering has been prevalent in cricket from the very very early days of the game. In retrospect, the harsh, obstinate ban on the cricketers by Cricket Australia seems to be an over-reaction. Especially when ICC already has guidelines in place to deal with such problems.

However, at the same time, Steven Smith confessing that he had ‘walked away saying he did not want to know about it’ does not at all absolve him of the deed. He has acknowledged that it was a leadership failure … and that is exactly what it was.

But, isn’t shifting the blame on to David Warner and, worse still, Cameron Bancroft  more damaging to his image as a leader and a teamman? It seems curiously like personal damage control at the expense of one’s mates.

The proverbial ‘see no evil, hear no evil, speak no evil (unless in retrospect)’ attitude has brought a … well … (un)wise monkey shade  to the Sandpaper-Gate issue.