In 1969, Honduras and El Salvador faced off in the World Cup qualifiers. The action, however, was not limited to the football pitch. It became a fully-fledged war.

As dusk fell, a swarm of Honduras national football team fans gathered around the hotel. The mood was edgy, the sentiment bordering on mob fury. Barrels, sticks, sheets of tin, pebbles, stones … these were ready at hand. The men also eyed the cars parked at the side of the hotel.

As the evening stretched into the night, the crowd got into the act. The sticks were struck against the barrels and sheets of tin creating an incredible din. Rocks, stones and pebbles were pelted at the hotel windows. Firecrackers were set off. The fans leaned on the horns of the cars that stood outside the hotel. And there were whistles, chants and screams. The message, whether passed through missiles, noise or voice, was uniformly hostile.

The target was the El Salvador football team that were staying in the hotel. The idea was to deprive them of sleep and exhaust them with hostility before they took on Honduras in the first leg of their World Cup Qualifier showdown.

This was common enough. Especially in Latin America. More so between two countries who were far from being friendly neighbours.

That El Salvador would lose the next day was also quite expected. 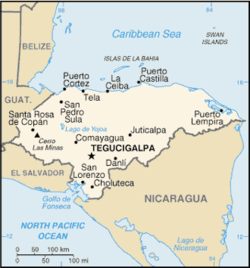 But there were things that were not quite normal in the scheme of things. Such as what happened in the Bolaños household when Roberto Cardona, the Honduran striker, netted the only goal of the match in the final minute of the match.  Amelia Bolaños, a 18-year-old girl watching the match on television in El Salvador, was shattered. She  got up, made her way briskly to the drawer where her father kept his pistol, and shot herself through the heart.

According to El Nacional, the Salvadoran newspaper, ‘The young girl could not bear to see her fatherland brought to its knees.”

Football tragic taken to the limits of fandom? Only the nation did not think so.

The funeral was televised across the country. The whole capital took part in it. At the head of the procession marched an army guard with the Salvadoran flag. Behind the flag-draped coffin walked Fidel Sánchez Hernández, the president of the nation. His ministers accompanied him. Behind the government officials walked the Salvadoran soccer team. They had just flown back on a special flight that morning, after being booed and spat on at the Tegucigalpa airport.

The death of the young girl had become a national issue.

It was in San Salvador that the return match took place. A week after the first game. 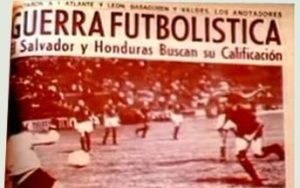 This time the Honduran football team could not sleep a wink the night before the game. The fans had hollered all night outside the hotel. They had broken all the windows and thrown rotten eggs, dead rats and rags that stunk the whole place up.

The route to the stadium was lined up with throngs of angry fans and patriots, holding huge portraits of Amelia Bolaños. The only reason the players were not lynched was because they travelled in the armoured cars of the First Salvadoran Mechanised Division.

The beautifully named Flor Blanca stadium looked like a war zone. Soldiers from a crack regiment of the Guardia Nacional, armed with sub-machine-guns, stood on the pitch. The Honduran national anthem was played, but was drowned by the roars and taunts of the crowd. The Honduran national flag was set on fire, much to the delight of the spectators. As the match got underway, beside the Salvadoran flag flew a tattered dishrag on the flagpole where the Honduran flag should have been.

The result was 3-0 in favour of the Salvadorans. The Honduras team were not really disappointed. Quite the contrary. All they cared about was getting back to their country alive. As Mario Griffin, the visiting coach, remarked, “We’re awfully lucky that we lost.”

The players, indeed, were lucky. The same armoured vans that had brought them to the stadium took them straight to the airport. They went home, thankful to be alive.

Many of the fans who had crossed the border to watch the match did not quite enjoy the same small blessing. In the stadium they were beaten, kicked, manhandled. Rushing for the border, many made directly for the hospital. As many as hundred and fifty cars of these fans were torched.

Within a few hours, the border between the two countries was closed.

Polish Press Agency journalist Ryszard Kapuściński was sitting with a Mexican political analyst named, coincidentally for soccer fans, Luis Suarez. This Suarez did not excel in the football field as his namesake was to do several decades later. Neither do we know of his mastication habits. But, he could foretell political developments. He had foretold the fall of João Goulart in Brazil, the fall of Juan Bosch in Dominican Republic and the fall of Marcos Pérez Jiménez in Venezuela.

Now, looking at the press reports of the football match, he told Kapuściński that there was going to be a war. And Kapuściński flew to Honduras. Good for him, because the prophecy came true.

The playoff took place in Mexico City on 27 June. The Honduran fans sat on one side of the stadium. The Salvadoran fans were placed on the other. They were separated by 5000 Mexican policemen armed with thick clubs.

El Salvador triumphed 3-2 in the match, scoring the deciding goal in extra time.

The same day, the Salvadoran government dissolved all diplomatic ties with Honduras. The official statement said that in the ten days since the game in El Salvador 11,700 Salvadorans had been forced to flee Honduras. It claimed that Hondurans had “done nothing to prevent murder, oppression, rape, plundering and the mass expulsion of Salvadoreans” and thus there was little point in maintaining relations. It further claimed that “the government of Honduras has not taken any effective measures to punish these crimes which constitute genocide, nor has it given assurances of indemnification or reparations for the damages caused to Salvadorans.” The Guardian published the story the next day, titling it Football’s Diplomatic Penalty.

Action began on 14 July 1969. El Salvador was put on blackout. The Salvadoran Air Force ( a glorified term indeed, as they used passenger airplanes with explosives strapped to their sides as bombers) attacked targets inside Honduras.

The war lasted 100 hours, and is often remembered both as the Soccer War and the 100-hour War. There were 6,000 fatalities and more than 12,000 wounded. About 50,000 people lost their homes and fields. Villages were destroyed.

The result was a stalemate. El Salvador finally withdrew its troops on 2 August 1969. On that date, Honduras guaranteed Salvadoran President Hernández that the Honduran government would provide adequate safety for the Salvadorans still living in Honduras. The tension around the border remained, even after the ceasefire.

In truth, it was not only football that led to the conflict. El Salvador, the smallest country in Central America and with the then greatest population density in the western hemisphere, had always had the problem of too much wealth in the hands of too few powerful families.

A lot of landless peasants emigrated to Honduras, a country almost six times as big. With more than 30,000 illegal Salvadoran settlers in Honduras, there was growing tension as the native Honduran peasantry demanded their own land in the 1960s. Things were not helped with the United Fruit Company, the American corporation, owning large banana plantations in the country, making redistribution of land next to impossible. There was pressure on the government to ask the Salvadoran ‘squatters’ to return home, whereas the Salvadoran government was bound to refuse entry to the emigrants because of the possibilities of an internal peasant revolution.

Thus, the tension between the two countries was at boiling point when the World Cup qualifiers took place. Hate, slander, aggression was everywhere. The hostilities around the football, aided by the suicide of Amelia Bolaños, lit the final catalytic spark to the time bomb.

However, as Kapuściński writes: “Both the governments [were] satisfied [with the war]. For several days Honduras and El Salvador occupied the front pages of world press and were the object of interest and concern. The only chance small countries from the Third World have of evoking a lively international interest is when they decide to shed blood.”

The links between politics and football in Latin America are strong, and the borders fuzzy. A year later, in 1970, when Brazil won the World Cup in Mexico, and thereby the Jules Rimet Trophy, a sentiment was heard: “The military right wing can be assured of at least five more years of peaceful rule.”

The wonderful game can sometimes be a weird one.

CricketSoccer Desk - October 21, 2021
0
Manchester United came from two goals down to beat Atalanta 3-2 at Old Trafford in the Champions League on Wednesday night.

I have to take into account everyone’s age and their experience;...