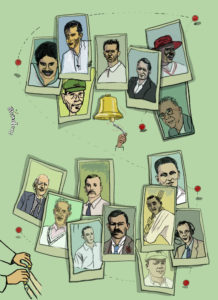 Born January 8, 1923: Johnny Wardle Yorkshire and England left-arm orthodox spinner, with one of the lowest averages among bowlers with more than 100 wickets since World War 2.

Died January 11, 1902: Johnny Briggs great exponent of left-arm spin for Lancashire and England, as well as a hard-hitting batsman

Died January 1, 1944: Charlie Turner nicknamed ‘Terror’, one of the greatest bowlers of Australia who formed a deadly combination with JJ Ferris

Died January 5, 1952: IAK Pataudi Nawab of Pataudi, scored a hundred on debut for England during the Bodyline series, refused to field in the leg-trap and later led India against England. Died young while playing polo.

Died January 5, 1966: George Duckworth classy Lancashire and England wicketkeeper with one of the loudest appeals in the game

Died January 5, 1994: Brian Johnston one of the best-loved broadcasters in cricket, famous for his warm-hearted humour and the leg-over incident

The T20 Leagues are a curse