“One of India’s problems is that they cannot afford to play an extra batsman, for with the sole exception of the injury-prone Kedar Jadhav, none of their top six bowls”

Why did India lose to Australia at Sydney? Some would suggest that the match was lost when they were 4/3 in pursuit of 289. The top order failed, they would say. And yet, thanks to Rohit Sharma, the Indian top four collectively scored 136 in 140 balls (Rohit got 133 of these), reasonably better than the effort of the Australian top four (143 in 193).

In other words, despite Shikhar Dhawan and Virat Kohli’s failures, the Indian top three did a decent job. Breaking things down to simple batting averages, Dhawan (45), Rohit (48), and Kohli (60) are expected to score approximately 153 between them every match. The method is crude, but it is a fair approximation.

Since that is the case, they have not really failed as a unit of three at Sydney, though Rohit scored all the runs. And when all three, or even any two of them deliver, India get off to incredible starts.

Let us consider only matches played between Australia, Bangladesh, England, India, New Zealand, Pakistan, South Africa, Sri Lanka, and West Indies. Against these sides, the Indian top three averaged a staggering 74.07 at a strike rate of 100.

Also read: Rohit Sharma’s 133 at the SCG indicates that he has finally attained Chasing Nirvana

This is a staggering average. No other side has hit even the 45-mark. The England top three have a superior strike rate (101), but they average only 44.42. The other sides are all below 38, with the number dropping to below 24 for Pakistan.

It is after the top three that things start to get wrong for India. India’s 4, 5, 6, and 7 have averaged only 30 between them in 2018 (against the same teams). This puts them at sixth position, ahead of only Australia (who are having a torrid time), Pakistan, and West Indies (the weakest of the nine sides). This is also an area where England pulls things up significantly. 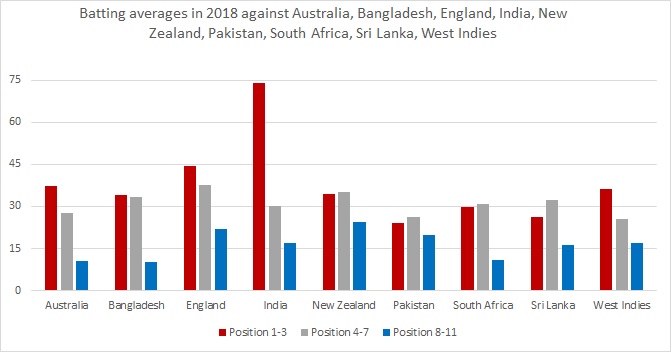 One of India’s problems is that they cannot afford to play an extra batsman, for with the sole exception of the injury-prone Kedar Jadhav, none of their top six bowls. An all-rounder at 7 is the most they can accommodate (Hardik Pandya played for most of 2018), but as the numbers show, three batsmen (of whom one is a wicketkeeper) and an all-rounder have failed to match the performances by 4 to 7 for other teams.

One must remember that if Jadhav does not play, India have to go in with exactly five bowlers. If someone has an off day, or worse, breaks down, bowling fifty overs will not be an easy task.

India have been excellent in 2018, but they have also lived on the edge. They have managed to get away. Their top three have done a fantastic job of covering up for the next four. Kedar was there when Hardik broke down in the Asia Cup match against Pakistan Had he not been there, India would have had to get 31 balls out of a group of non-bowlers.

This is precisely why Suresh Raina and Yuvraj Singh have kept on making fleeting appearances in the side.

Indeed, if their batting failure needs to be covered up and they are not required to bowl, how relevant are India’s current 4, 5, and 6? And if No. 7 comes to bat after a non-performing 4 to 6, what chance does he stand?

Down but not out

Faisal Caesar - April 19, 2021
0
“Just keep in mind, if a system remains unchecked and unquestioned, it starts to create its own rules and force others to follow it”   A...

I know before the game what will happen if we win...

What I have now with Ole is different; he wouldn’t go...