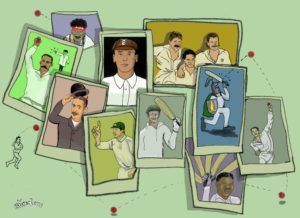 Jan 1, 1908 –  At Melbourne, the great Jack Hobbs made his Test debut. He batted for the first time on the following day, scoring 83. England won a thriller by one wicket.

January 3, 1949:  At Calcutta, Everton Weekes scripted his fifth consecutive hundred in as many innings.

January 3, 1929: At Melbourne, Don Bradman scored the first of his 29 centuries.

January 4, 1898: At Melbourne, Ernie Jones became the first bowler to be called for throwing in Test cricket. The umpire was Jim ‘Dimboola’ Philips.

January 6, 1984: At Sydney, Greg Chappell, Dennis Lillee and Rodney Marsh appeared in a Test match for the last time. Chappell bowed out after scoring 182, Lillee captured 8 wickets and Marsh grabbed 6 catches in a 10-wicket win. Abdul Qadir was the last batsman to register on the scoreboard as c Marsh b Lillee.

January 6, 2008: At Sydney, controversy erupted. Australia went 2-0 up against India, but it was marred by questionable decisions and appealing, with Ricky Ponting practically giving Sourav Ganguly out after Michael Clarke had grabbed a bump ball and appealed. Oh, and the Test also created Monkey-Gate

January 14, 1933: At Adelaide, Australian captain Bill Woodfull was struck over the heart by a Larwood bouncer as the Bodyline‘s nasty head emerged in all its ugliness..

January 15, 1988: At Madras, Narendra Hirwani bowled India to a series levelling win against the mighty West Indies with figures of 16 for 136. This remains the best match analysis by a debutant, eclipsing Bob Massey’s 1972 Lord’s feat by one run.