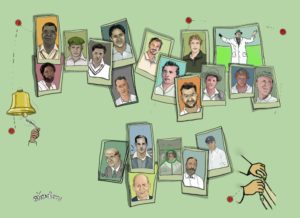 Born January 19, 1922: Arthur Morris, a member of Bradman’s Invincibles, whom the great man considered one of the greatest openers of all time

Born January 20, 1895: Frank Chester, widely accepted to be the greatest umpire in the history of the game

Born January 25, 1988:  Cheteshwar Pujara, the Indian middle-order stalwart who may well end up to be the best No 3 ever produced by the country.

Born January 26, 1954:  Kim Hughes, former captain of Australia who could look great with the bat when in full flow

Born January 27, 1979:  Daniel Vettori, perhaps the greatest spinner produced by New Zealand, who was more than a decent batsman as well.

Born January 28, 1873: Monty Noble, great Australian all-rounder and captain, one of the pioneers of swing bowling who could bat in the top order with elan.

Born January 30, 1929:  Hugh Tayfield, the South African off-spinner, among the top three greatest tweaker of that variety alongside Jim Laker and Muttiah Muralitharan

Born January 31, 1889:  Frank Foster, left-arm pacer who formed a formidable partnership with the great SF Barnes for England and an all-round great for Warwickshire

Died January 16, 1907: Alfred Shaw, the man who bowled the first ball in Test cricket, captained England and was the driving force behind quite a few of the early  cricket tours.

Died January 19, 2004: David Hookes, the talented Australian batsman, who perished tragically at the age of 48 after being punched by a bar-room bouncer

Died January 22, 1978: Herbery Sutcliffe, one of the greatest opening batsmen to grace the game, who formed a supreme association with Jack Hobbs