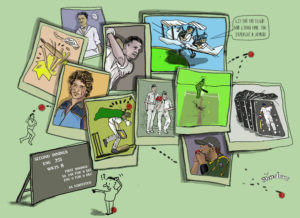 Jan 16, 1933: Bodyline struck again at Adelaide. Australian wicketkeeper Bert Oldfield struck on the head by Harold Larwood. An inch on either side and he could have been killed.

Jan 20, 1950: Neil Harvey scripted an epic 151 not out as Australia overcame a 236-run first innings deficit to snatch a 5-wicket win at Durban.

Jan 23, 1887: Charlie Turner and JJ Ferris skittle England out for 45, their lowest ever score in Test cricket. However, England came back to win that Sydney Test by 13 runs.

Jan 21, 1991: Even as battled Queensland at the Carrara Oval, David Gower and John Morris took a joy ride on a Tiger Moth, earning the wrath of the management.

Jan 29, 1998: The England-West Indies Test match at Kingston abandoned after 10.1 overs because of a dangerously underprepared pitch.

Jan 30, 1988: At Sydney, future match referee Chris Broad smashed the stumps with his bat after losing his cool with his wicket.

Jan 31, 2010: Shahid Afridi chomped down on the white kookaburra, and gets banned for two T20I matches.

The T20 Leagues are a curse