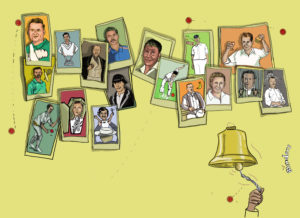 Born February 1, 1981:  Graeme Smith, champion opening batsman and most successful captain of South Africa, who walked out to save a match with a broken hand

Born February 1, 1982: Shoaib Malik, the Pakistani all-rounder and captain with a curiously long and chequered career, with a high-profile cross-border cross-sport match

Born February 3, 1936: Bobby Simpson, one of the greatest opening batsmen of the game, a superb captain and successful coach

Born February 3, 1851: Lord Harris, former England captain and administrator, who believed counties should be represented by players of limited zip codes (psst … he himself was born in Trinidad)

Born February 6, 1931: Fred Trueman, in his own words: “’Finest Bloody Fast Bowler that Ever Drew Breath”

Born February 6, 1873: Albert Trott, the Australian all-rounder who was neglected by his country and became a Middlesex legend

Born February 7, 1857: Alfred Lyttlelton, double international who went on to become a successful politician. One cap for England in football, four in cricket, played as a wicketkeeper, picked up 4 for 17 the only time he bowled in a Test match, all wickets with lobs.

Born February 8, 1963: Mohammad Azharuddin, a magician with the bat and even more so in the field.

Born February 9, 1970: Glenn McGrath, a metronome with the ball, perhaps the greatest pace bowler of his generation

Born February 9, 1922: Jim Laker, the man who captured 19 wickets in a Test match and celebrated with a beer and sandwich. Perhaps the greatest off-spinner of all time.

Born February 10, 1847: AN ‘Monkey’ Hornby, the Lancashire legend and captain of England in the Birth of The Ashes Test.

Born February 11, 1937: Bill Lawry, the famous corpse with pads on, one of the greatest opening batsmen of Australia. The Lawry-Simpson combination remains one of the best in the history of cricket.

Born February 12, 1857: Bobby Peel, the man who bowled Australia out after being held under a shower.

Born February 12, 1949: Gundappa Viswanath, the littlest master of India, one of the most universally loved cricketers and an artist with the willow

Born February 13, 1842: Ted Pooley, the superb wicketkeeper who did not keep in the first ever Test match because he was in jail for cricket-betting related problems.